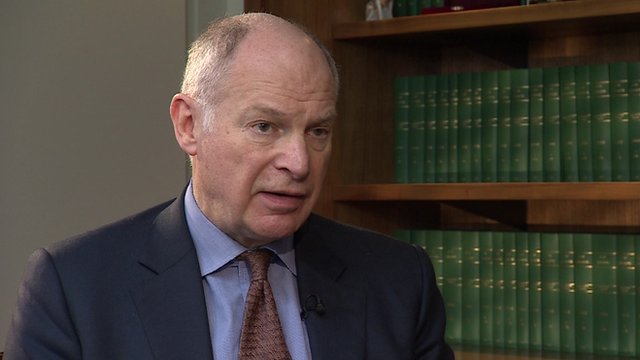 Lord Neuberger talks to the BBC’s Clive Coleman.
Legal aid cuts could make people feel they cannot access justice and then “take the law into their own hands”, the UK’s most senior judge has said.
Legal aid in England and Wales will be restricted in a range of civil cases from April to cut a current £2bn bill.
President of the Supreme Court, Lord Neuberger, told the BBC the changes may even lead to higher court costs.
The Ministry of Justice said legal aid would still be provided “to those who most need it”.
The cuts mean people involved in a range of disputes, such as social welfare debt, employment, family problems, clinical negligence, divorce and housing problems will no longer be allowed legal aid.

But funding will continue for some cases including family law involving domestic violence or forced marriage and debt and housing matters where someone’s home is at immediate risk.

It means many people will have to pay privately for advice, find charitable help or represent themselves in trying to solve their disputes.

But Lord Neuberger said the consequences could in fact cost the government more.

He told the BBC: “My worry is the removal of legal aid for people to get advice about law and get representation in court will start to undermine the rule of law because people will feel like the government isn’t giving them access to justice in all sorts of cases.

“And that will either lead to frustration and lack of confidence in the system, or it will lead to people taking the law into their own hands.”

Lord Neuberger said another problem would be the increase in the number of people who represent themselves in court because they could not afford or get legal aid for a lawyer,

“This will mean that court hearings will last longer, the burden on court staff and judges will increase,” he said.

“And you may find the savings the government thinks it’s making in legal aid will be offset in other costs of courts and judges and court staff in supporting litigants in person.”

He told BBC Radio 4’s Today programme that many disputes could be resolved without going to court.

“But I think we need to be careful not always to run to the lawyer when we think we’ve got a problem.”

Shadow justice minister Lord Bach – the former legal aid minister – said he agreed mediation could be used in more cases but said that it “doesn’t come cheap either”.

He told Today that, “at a time of recession and also at a time now of big welfare reform, to take away the ability of people to get free legal advice when they need it is absolutely scandalous”.

Cuts should not be made “where you’re attacking, frankly, the very poorest and the most disadvantaged in society”, he added.

“Our whole system of justice is based on equality of law – if people can’t get some access to justice then why should people believe in the rule of law anymore.”

In a statement the Ministry of Justice said: “Legal aid will continue to be provided to those who most need it, such as where domestic violence is involved, where people’s life or liberty is at stake or the loss of their home.”

BBC legal affairs correspondent Clive Coleman said the changes were seen by many as nothing short of a revolution in the provision of legal aid with the government removing funding from entire areas of civil law.

The concern was that the cuts would affect the most vulnerable in society, he said.

The bill received Royal Assent after a parliamentary passage that saw it defeated 14 times in the House of Lords.

The Lords ultimately backed ministers by the narrowest of margins, with 238 votes on each side – a tie means a victory for the government.

But our correspondent said there was was “absolutely no chance” the government would row back on the changes.

Lord Neuberger also said it was “unfortunate” that Home Secretary Theresa May had attacked judges for “ignoring” rules on deporting foreign criminals.

But he said he would not get into a “slanging” match with Mrs May.

The interview came two weeks after Mrs May accused judges of making the UK more dangerous by ignoring rules aimed at deporting more foreign criminals. She told the Mail on Sunday that they were choosing to “ignore Parliament’s wishes”.

“I think attacking judges is not a sensible way to proceed,” Lord Neuberger said.

“It causes me concern but it does not alarm me. No government has done anything to undermine judges.”

He added: “It is unfortunate that the home secretary has acted and spoken as she has done.”

Permanent link to this article: https://operationfatherhood.org/legal-aid/walesengland-lord-neuberger-uks-most-senior-judge-voices-legal-aid-fears/