A new world heaves into view this week with sweeping changes in the fields of welfare, justice, health and tax 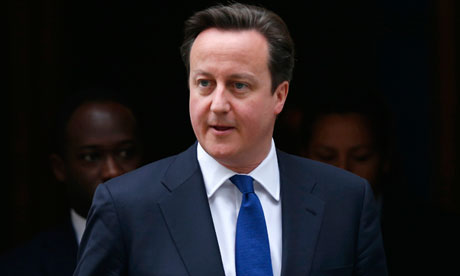 David Cameron leaves No 10, Downing Street: many of his government’s radical cuts and reforms are due to be introduced this week. Photograph: Andrew Winning/Reuters

The aim is to tackle overcrowding and encourage a more efficient use of social housing. Working age housing benefit and unemployment claimants deemed to have one spare bedroom in social housing will lose 14% of their housing benefit and those with two or more spare bedrooms will lose 25%. An estimated 1m households with extra bedrooms are paid housing benefit. Critics say it is an inefficient policy as in the north of England, families with a spare rooms outnumber overcrowded families by three to one, so thousands will be hit with the tax when there is no local need for them to move. Two-thirds of the people hit by the bedroom tax are disabled.

Branded by Labour a “day of shame” for the legal aid system, the cutoff to claim legal aid will be a household income of £32,000, and those earning between £14,000 and £32,000 will have to take a means test. Family law cases including divorce, child custody, immigration and employment cases will be badly affected.

Council tax benefit, currently a single system administered by the Department for Work and Pensions, is being transferred to local councils with a reduction in funding of 10%. Council tax benefit is claimed by 5.9 million low-income families in the UK. The new onus on councils has come at a time when local government funding, according to the Institute for Fiscal Studies, has fallen by 26.8% in two years in real terms. A Guardian survey of 81 councils last week found many claiming they face difficult cuts, with almost half saying they were reducing spending on care services for adults. This also comes at a time when 2.4m households will see a council tax rise.

Savings: up to £480m a year, but depends on decisions of local councils.

NHS commissioning changes for ever

An NHS commissioning board and a total of 240 local commissioning groups made up of doctors, nurses and other professionals will take control of budgets to buy services for patients. They will buy from any service providers, including private ones so long as they meet NHS standards and costs. Strategic health authorities and primary care trusts disappear.

Costs: £1.4bn, mainly in redundancies, followed by savings as high as £5bn in 2015 owing to fall in staff numbers.

The Financial Conduct Authority and Prudential Regulation Authority, housed in the Bank of England, replace the Financial Services Authority. The Bank promises these changes do not represent the death and Easter resurrection of the same body. A new, proactive supervisory approach towards the City is promised, focused on outcomes rather than a tick-box culture. It has powers to prosecute, throw people out of the industry and withdraw a bank’s licence. Above all it monitors risk to the financial system as a whole.

Announced in the 2012 budget. George Osborne said the 50p rate, introduced in April 2010, caused massive distortions in 2010-11 and raised only £1bn, rather than the £2.5bn forecast by Labour back in 2009. HMRC found £16bn was deliberately shifted into the previous tax year, largely by owner/directors of companies taking dividends in the previous year when the highest rate was still 40p. Labour claims 13,000 millionaires will get a £100,000 tax cut.

The personal independence payment (PIP) replaces the disability living allowance and, according to the DWP, is not based on your condition, but on how your condition affects you, so narrowing the gateway to the PIP.

It will contain two elements: a daily living component and a mobility component. If you score sufficient points, a claim can be made. Assessments will be face-to-face rather than based on written submissions, starting in Bootle benefits centre, handling claims across the north-west and north-east.

The most popular of the welfare reforms will begin on 15 April in the London boroughs of Bromley, Croydon, Enfield and Haringey. The intention is that no welfare claimants will receive in total more than the average annual household income after tax and national insurance – estimated at £26,000. Other councils will start to introduce it from 15 July and it will be fully up and running by the end of September. Some estimate 80,000 households will be made homeless. The DWP says around 7,000 people who would have been affected by the cap have moved into work and a further 22,000 have accepted employment support to move into work. Households where someone is entitled to working tax credits will not be affected.

The new in- and out-of-work credit, which integrates six of the main out-of-work benefits, will start to be implemented this April in one jobcentre in Ashton-under-Lyne, Greater Manchester. The aim is to increase incentives to work for the unemployed and to encourage longer hours for those working part-time. It had been intended that four jobcentres would start the trial in April, but this has been delayed until July, and a national programme will start in September for new claimants. They will test the new sanctions regime and a new fortnightly job search trial, which aims to ensure all jobseeker’s allowance and unemployment claimants are automatically signed onto Job Match, an internet-based job-search mechanism. Suspicion remains that the software is not ready.

Permanent link to this article: https://operationfatherhood.org/legal-aid/uk-the-day-britain-changes-welfare-reforms-and-coalition-cuts-take-effect/