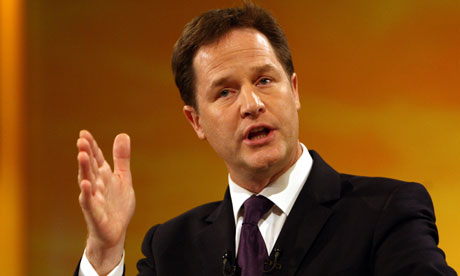 Nick Clegg proposed a series of changes to the £500-a-week benefits cap, including a plan to exempt current claimants.     Photograph: David Jones/PA
Deputy PM attempts to ameliorate consequences of change which critics claim will make many families homeless

David Cameron has been lobbied by the deputy prime minister, Nick Clegg, on the need to rewrite the government’s flagship benefit reform to help children suffering as a result.

Clegg proposed a series of changes to the £500-a-week cap, including exempting current claimants, in an attempt to ameliorate some of the worst consequences of the change, which critics claim will make 40,000 families homeless by making their current homes unaffordable.

It is understood Clegg made his appeal during a meeting attended by the chancellor, George Osborne, and Danny Alexander, chief secretary of the Treasury. Cameron asked the Liberal Democrats to return with more details on how the changes could be made.

It is understood the greatest resistance to change to the policy – billed by Conservatives as a way to ensure that work pays more than a life on benefits – is coming from the Treasury who fear the political ramifications of a U-turn and the financial costs.

Yesterday Simon Hughes, the Lib Dem deputy leader, attacked the cap as “an instrument for breaking up families, or punishing children for the poor decisions of their parents” by forcing people out of their homes into cheaper accommodation.

Lib Dem MP Jenny Willott, on the work and pensions select committee, said the priority was ensuring children did not suffer “from their parents life decisions” and government cuts.

The development follows major defeats for the government in the Lords last week over its plans to restrict the payment of welfare and disability benefits. It is understood that reforms to legal aid will also be attacked by Lib Dem peers. Proposed changes to access to the justice system for those unable to afford a lawyer, slammed by critics as “an assault on the Magna Carta”, will be savaged by a cross-party group of peers tomorrow.

Lib Dem peer Lord Phillips of Sudbury told a meeting of legal experts they could “reasonably expect major changes to the bill”. He added: “There is no doubt that, if the government doesn’t make major concessions, there’ll be votes on amendments in the House of Lords and the government will lose. I can promise you that.”

A forced climbdown or defeat for the government over its bill to limit legal aid or the benefits cap would raise further questions about the coalition’s ability to slash departmental budgets.

Labour’s shadow justice minister, Lord Bach, said his fellow peers were ready for a fight. “There is opposition right across the House of Lords to elements of the bill,” Bach said. “Crossbenchers and Lib Dems, as well as Tories, have made clear their opposition and have tabled amendments. It would be madness for the government not to listen to these voices.”

The government is proposing removing legal aid from all clinical negligence cases as well as other areas such as debt, housing, welfare, employment and family disputes. Under the new system, anyone with assets worth more than £1,000 will have to pay at least £100 towards their legal costs. The lowest fees for civil and family law advice will all be cut by 10%, leading to fears many solicitors will no longer believe the work is worth their time.

Campaigners have attacked the bill, which introduces measures such as means testing for legal aid, claiming it will put a price on justice. “This government is set to do what no other has done, which is to rip up the principle of Magna Carta,” said a spokesman for Sound Off For Justice, a legal campaign group that opposes the bill. “The British principle of fairness and the right to have access to justice, safeguarded since 1215, is being taken away on a cuts argument.”

The government has denied that the cuts will hit the vulnerable. Under the new measures, for example, the government has pledged to retain legal aid for domestic violence victims in private family law matters.

Permanent link to this article: https://operationfatherhood.org/legal-aid/uk-nick-clegg-unites-with-lords-in-battle-to-alter-benefit-cuts/