More than a fifth of frontline social worker posts are unfilled in Birmingham, it has been revealed. 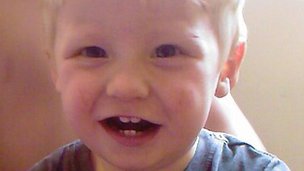 Keanu Williams died in January 2011 after being found with 37 injuries in Ward End, Birmingham

Currently, the equivalent of 106 out of 494 fulltime, frontline permanent posts remain vacant.

It follows a serious case review published on Thursday into the death of two-year-old Keanu Williams in 2011.

The review criticised all agencies involved, which it said had “collectively failed” to protect Keanu, who was beaten to death by his mother.

If Birmingham children are to be protected, the city desperately needs to recruit more social workers, according to the man in charge of children’s services.

Peter Hay, acting strategic director for children, young people and families, said: “We’ve been very clear. The situation we’ve got at the moment is very serious and very frail.

“I neither have sufficient workforce, nor sufficient capacity and capability in that workforce to meet the needs of children in this city and that’s why the situation remains as serious as it does today.

“We do have some great social workers who do some amazing social work, but we do have neither enough staff nor consistency of practice.”

Agency staff cover almost half of the empty posts but that can bring its own problems as a number of recent investigations across the country by Ofsted have identified.

Mr Hay said many of those employed by the local authority also lacked experience.

“Losing experienced staff undermines not only the quality of decision-making but also the effectiveness of communication both internally and with other agencies – a problem consistently identified in serious case reviews, including that of Keanu.”

Mr Hay said the problem was in part “of our own making” as the local authority had “not supported our staff well enough” in the past.

For the past six years, the authority’s safeguarding children’s department has been rated inadequate by Ofsted, further hampering recruitment of staff.

Mr Hay is himself the fourth head of children’s services in Birmingham since 2009.

Chief executive of the British Association of Social Workers Bridget Robb said that a situation “where only half of social worker posts are filled by permanent staff is unsustainable”.

“Agency staff do a great job, but are expensive and temporary, which makes it difficult to build long-term relationships with families and children.”

She added that Birmingham “needs to look at why it is having difficulty recruiting and retaining staff”.

“Low morale must be addressed. Social workers do a complex and difficult job and they need to be properly supported.

Permanent link to this article: https://operationfatherhood.org/family-law-public/social-worker/england-birmingham-struggles-to-recruit-social-workers/