WALES/ENGLAND – Warning over ‘needless criminalisation’ of children in care 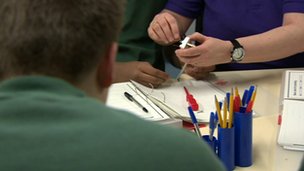 Children in care in England and Wales are being needlessly criminalised for “trivial incidents”, MPs have warned.

The Commons’ Justice Committee said vulnerable children were being drawn into the criminal justice system in a way those from family homes were not.

It is urging early intervention, use of restorative justice and alternatives to custody to help cut reoffending.

At the moment, there are about 1,800 people under the age of 18 in custody in England and Wales. Numbers have fallen sharply over the past decade, but still remain among the highest in Europe.

In a new report, the cross-party committee suggests the youth justice system is currently failing children in care and that many vulnerable people are “effectively being abandoned” by children’s and social services.

It warns that children in care are at much greater risk of being drawn into the criminal justice system than those who are not and often come to the attention of the police for minor incidents that would never come to light if they occurred in family homes.

“Poor behaviour which would be dealt with within the family should not be an express route into the criminal justice system for children who do not have the benefit of a normal family life,” committee chairman, Lib Dem MP Sir Alan Beith, said.

“We heard one example of the police being called to a children’s home to investigate a broken cup.”

The number of young people entering the criminal justice system for the first time has fallen sharply since 2007.

But the MPs believe children in care have been largely excluded from these positive trends and much more support is needed for those in custody and those recently freed as well as intensive efforts to stop others from being incarcerated.

The Youth Justice Board should spend more of its annual budget on prevention rather than detention, they say, since once in custody, three-quarters of young people go on to offend again.

“Youth custody should only be used in cases of genuine last resort,” Sir Alan added.

“More of this money needs to be spent on early intervention with children at risk of offending, on restorative justice approaches and on intensive alternatives to custody with high-risk offenders such as multi-systemic therapy and intensive fostering.”

The committee says it supports a government drive to improve young offenders’ literacy, but believes the focus should be on increasing services in the community rather than in secure institutions given the relative short time most offenders spend there.

Penal reformers said the MPs had highlighted longstanding failings in the youth justice system as well as the need to further reduce unnecessary arrests – which they say have fallen by more than 100,000 since 2008.

“The present system is long past its use-by date,” said Andrew Neilson, director of campaigns at the Howard League for Penal Reform. “Focused upon criminalisation and punishment, it lets down boys and girls and fails to make the public safer.”

The government launched a consultation last month on the education that young offenders receive while in custody but the Howard League said this was “too narrow” and ministers must “broaden their horizons”.

“Local authorities have a duty to support these young people and act quickly if they are at risk of becoming involved in criminal behaviour,” he said.

“We have begun a radical review of the youth secure estate to put more emphasis on education and training, so for those young people for whom custody is the right place, we support them in turning their backs on crime,” he added.

Permanent link to this article: https://operationfatherhood.org/family-law-public/children-in-care/walesengland-warning-over-needless-criminalisation-of-children-in-care/