Child protection services in Somerset have been given the lowest rating of inadequate by Ofsted. 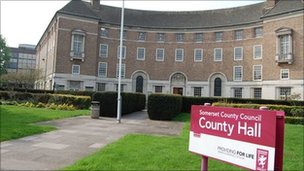 The council has invested £1.4m in children’s services

The verdict follows an unannounced inspection by Ofsted inspectors.

Social services was told to review its child protection plans immediately including cases that have been closed in the last three months.

The council described the report as “deeply disappointing” and pledged to make extra funds available for investment in the department.

Chief executive Sheila Wheeler, said: “We now have the right people in the right place doing the right things.

“Ofsted has recognised our investment in the service and our appointment of a nationally recognised interim director of children’s services, Peter Lewis, to steer us through the changes we need to make.

“We do acknowledge that our speed of change has not been fast enough.”

But a strand running through seems to be ineffectual managers.

While there was good work it was down to the individual social workers rather than effective management.

An interim director of children’s services, Peter Lewis, was brought in this April. Presumably the council is hoping he will lead from the top.

Permanent link to this article: https://operationfatherhood.org/family-law-public/child-protection/england-somerset-child-protection-services-rated-inadequate/