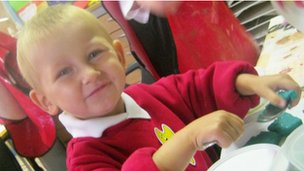 Fifty councils in England have been re-inspected by Ofsted over the past 16 months after earlier inspections had found “significant weaknesses”.

Seventeen were rated as inadequate under its new system of inspections.

A charity said the system was creaking, but the government said it was “taking action to secure swift improvement”.

The figures come the day after a serious case review found a number of chances had been missed to protect four-year-old Daniel Pelka, from Coventry, who was murdered in 2012.

The review found “no professional tried sufficiently hard” to talk to Daniel, who was beaten and starved by his mother and her partner.

Ofsted toughened its inspection of child protection procedures in May 2012.

A new system of unannounced inspections was introduced, looking at factors such as how well children are helped and protected, the quality of front-line practice and how well-led children’s services departments are.

Since then, it has tested 50 local authorities it said had “significant weaknesses” in previous inspections.

The 17 local authorities that were rated inadequate were deemed to be failing to meet minimum standards.

Of the rest, none was rated as outstanding, four were classed as good, with the remainder deemed adequate – a rating Ofsted will change later this year to “requires improvement”.

Among the failing authorities were Birmingham, the country’s largest council, which was told to improve the delays in protecting children and how it assesses risk.

Along with Cumbria and Calderdale councils, Birmingham had been rated inadequate under the previous Ofsted regime.

Another failing council, Doncaster, is having its child protection responsibilities removed and an independent trust created.

Northamptonshire County Council, also rated inadequate, said it would not be able to improve its services for another two years.

Overall, the number of inadequate authorities has doubled in five years.

Dame Clare Tickell, chief executive of the charity Action for Children, said: “Hundreds of vulnerable children at risk of dying and serious harm are falling through the cracks of a creaking child protection system.

“Limited resources, dwindling support for families and a real need for people to work together are all taking their toll.”

Andrew Webb, chairman of the Association of Directors of Children’s Services, said that while he agreed the system was creaking, he was unhappy with the way Ofsted rates councils.

“I don’t accept that child protection services have deteriorated,” he said.

“If you objectively look at the quality of life of children in Britain, the Ofsted judgements aren’t supported.

“They have a way of looking at systems and services which is designed to find fault.”

He said the lower number of child murders in recent years showed that children were better protected.

In a statement, the Department for Education said: “Any failure in children’s services is very serious. When councils are putting children’s welfare at risk, we will not hesitate to intervene.

“It is particularly worrying that in a small number of local authorities failure has persisted – we are taking action to secure swift improvement. However, there is no quick fix.

“We must be assured any progress is embedded and sustained.”