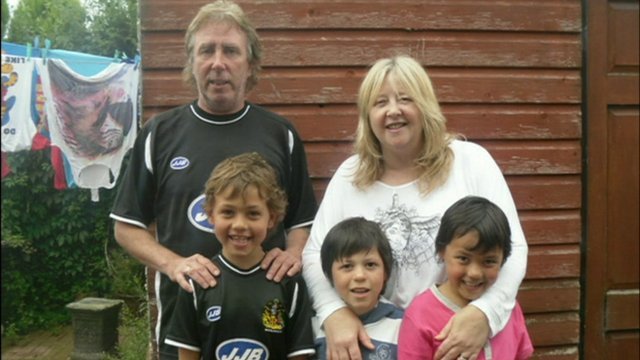 Adoption charities in England are to be given an extra £16m to help tackle a backlog of children in care waiting for an adoptive family.

The funds will be made available by the Department for Education from later this year until 2016.

Ministers say the extra money for charities is part of a wider drive to speed up adoptions and encourage would-be adopters to come forward.

They believe the current system is too slow and unnecessarily bureaucratic.

There is concern that potentially suitable adopters are often turned away and others are left waiting up to a year or more to be approved.

The government also believes that some councils take too long to put children in care up for adoption.

To tackle the problem, ministers have already allocated £50m to local authorities to recruit and support adoptive families.

But they want charities to take a bigger role and say this extra £16m for voluntary adoption agencies over three years will allow them to explore “innovative ways” of tackling the problem.

Children and Families Minister, Edward Timpson said: “There are still over 4,000 children waiting to be adopted nationally, and we cannot stand by whilst children’s futures hang in the balance.

“This is why we are taking a closer look at how we are recruiting new parents by giving voluntary adoption agencies a bigger role.

“We know more than 650,000 people would consider adopting right now, yet more than 700 additional adopters are needed each year to keep up with the growing number of children waiting to be adopted.

“What is important is that children who are in need of a permanent, loving home are found one as soon as possible – not who delivers the service.”

The Local Government Association said it had no objections to adoption charities being given extra cash support, saying it was “keen to work with them to address the shortage of adopters”.

Alan Worsley, of Barnardo’s, described the initiative as a “welcome boost” to the voluntary sector.

“Voluntary adoption agencies such as Barnardo’s offer a critical service, often drawing on invaluable expertise and experience in finding families for those children who are not always top of the pile and wait the longest to be adopted,” he said.

“This investment will help to increase numbers of prospective adopters for the thousands of children desperately waiting for their new families.”

She said: “Coram has long pioneered innovative ways of providing security for the most vulnerable children, such as through concurrent planning, a special method of fostering babies which enables them to be adopted by their foster carers if that is what is needed.

“We have also led the way in working with local authorities to partner on adoption and share best practice. In partnership with Coram, Kent County Council’s adoption service has recently increased the number of children placed with adoptive families by 110%.

“Finding families who can restore children’s trust in adults is a delicate and complex challenge so any added investment is to be welcomed.”

In January a new map showing the number of children waiting to be adopted in different parts of England was published and a new telephone hotline – 0300 222 0022 – for people who want to adopt was also launched.

Permanent link to this article: https://operationfatherhood.org/family-law-public/adoption-charities/england-funding-boost-in-search-for-adopters/