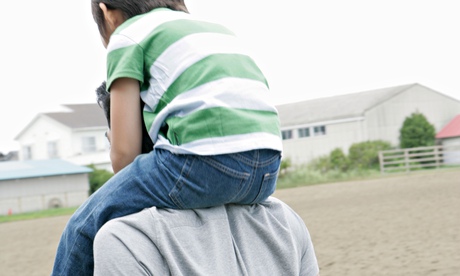 The judge said there was a risk that, if the process of deciding on a man’s contact with his son was not fair to one parent, that unfairness might ultimately disadvantage the child. Image posed by models. Photograph: Amana images/Alamy

The most senior family judge in England and Wales has asked the justice secretary, Chris Grayling, to explain how a case involving a father’s contact with his son can proceed without legal aid.

In a judgment that in effect challenges the Ministry of Justice’s policy of removing public funding for most matrimonial and separation hearings, Sir James Munby has had to adjourn a case because he has reached a legal dead end.

The decision, made last month but only published on Monday, comes shortly after a serious fraud case collapsed owing to cuts in legal aid; the court of appeal subsequently reinstated the trial.

Restrictions imposed by the Legal Aid, Sentencing and Punishment of Offenders Act 2012 have resulted in the family courts being inundated by unrepresented claimants because legal aid is no longer available for their claims.

In a family case identified only as Q v Q, the lack of legal aid for a convicted sex offender who wants to maintain contact with his son has emerged as a crucial factor preventing the court delivering a fair hearing. The unrepresented man speaks little English and requires an interpreter.

After considering submissions, the president of the family division indicated that for justice to be delivered the father may need to be represented and possibly call expert witnesses. Munby said precedents from the European court of human rights showed “that there could be circumstances in which, without the assistance of a legally qualified representative, a litigant might be denied [their right to a fair hearing].

“The question then is what is to be done because, on one view, we have … reached an impasse, which is unthinkable. This case raises, in quite an acute form, a problem which is increasingly troubling judges sitting in the family court at all levels.”

Either the mother, who is publicly funded, or the court itself might have to pay, he suggested, “in order to ensure a just and fair hearing”.

He continued: “It seems to me that these are matters which are required to be investigated in justice not merely to the father, but I emphasise equally importantly to the son, as well as in the wider public interest of other litigants in a similar situation to that of the father here … there is the risk that, if one has a process which is not fair to one of the parents, that unfairness may in the final analysis rebound to the disadvantage of the child.”

Munby concluded: “I propose to adjourn this matter for … a short time, inviting the Ministry of Justice – or it may be the secretary of state for justice or it might be the minister for the courts and legal aid – to intervene in the proceedings.”

Their submissions, he suggested, should address who should pay if funding for legal representation for the father is necessary.

The ministry has defended successive cuts, arguing that the legal aid system in England and Wales costs £2bn a year and is one of the most expensive in the world.

This article was amended on 9 June 2014. The word “custody” was changed to “contact” in the headline and first paragraph to better reflect the circumstances of this case

Permanent link to this article: https://operationfatherhood.org/family-law-private/walesengland-top-family-judge-adjourns-fathers-contact-case-amid-legal-aid-impasse/