Legislation to enable same-sex marriages to take place in England and Wales has been published. 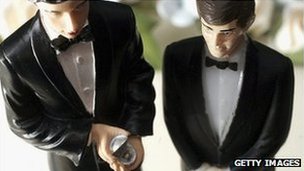 The bill includes a “quadruple lock” to protect religious freedom, the government says

Culture Secretary Maria Miller told BBC Radio 4: “We feel that marriage is a good thing and we should be supporting more couples to marry.”

There would be adequate protection for religious freedoms, she said.

The bill has divided Conservatives, with former Defence Secretary Liam Fox recently describing it as “ill thought through and constitutionally wrong”.

Conservative MPs will get a free vote on the legislation when it is debated in the Commons on Tuesday 5 February, meaning they will face no repercussions if they decide to defy government policy.

More than 100 Tory MPs are thought to be against the idea, but the bill is likely to pass through the Commons with the support of Labour and Liberal Democrat MPs.

Same-sex couples have been able to enter into civil partnerships since 2005, entitling them to the same legal rights as married couples across a range of matters, such as inheritance, pensions provision, life assurance, child maintenance, next of kin and immigration rights.

The new law, the Marriage (Same Sex Couples) Bill, will enable same-sex couples to get married in both civil and religious ceremonies – where a religious institution has formally consented.

It will also allow couples who have previously entered into civil partnerships to convert their relationship into a marriage.

Mrs Miller said the government recognised that “some churches won’t want to participate in same-sex marriages”.

“We are trying to make sure that there are the protections there for churches who feel that this isn’t appropriate for their particular beliefs,” she told BBC Radio 4’s Today programme.

However, the government also wanted any religious institution that did want to carry out same-sex marriages to be able to do so, she said.

The Church of England and Roman Catholics, among other denominations, have voiced opposition to the plans and are expected to oppose the bill, even with its caveats.

But some religious groups, including Quakers, Unitarians and Liberal Judaism, are in favour.

The culture secretary set out the legal position of the Church of England and the Church in Wales in some detail in a blog post in December.

“The Church of England, as the established church, is a special case. It has a duty in law to marry any person in their local parish church, regardless of their religious affiliation,” she wrote.

The legislation would ensure this duty did not apply to same-sex couples, she said.

But she added that it could put forward a change to the law “of its own accord” if its governing body, the Synod, changed its policy: “Put simply, should the Church of England decide to carry out same-sex marriage in the future, it can itself amend legislation to effect this with the approval of Parliament.”

Mrs Miller told the Commons in December that no religious organisation “will ever be forced to conduct marriages for same-sex couples”.

Mr Fox has said the proposals will put the established church in an “anomalous and absurd” position.

In a letter to constituents that was made public earlier this month, Mr Fox said same-sex relationships should be treated “with tolerance and respect”, but he did not believe there was much demand for them to be recognised as marriages.

“The legislation looks as though it was made on the hoof to deal with the political problem du jour,” he wrote.

The government was in danger of “further weakening and splintering Britain’s traditional religion at a time when many Christians feel that they are under threat”, he said.

“To fail to understand this is to risk an affront to a large stabilising and normally acquiescent section of this country which will sow completely unnecessary seeds of dissent.”

The Bishop of Leicester, the Right Reverend Tim Stevens, said marriage should continue to be “a union between one man and one woman. It is a social institution that predates both church and state and has been part of the glue that has bound countless successive societies together.”

The “absence of an overwhelming public consensus for change ought at least to give pause for thought”, he said.

But John Wadham, general counsel at the Equality and Human Rights Commission, welcomed the move: “We agree that couples who wish to marry should be permitted to marry in church if their church also wishes to marry them.”

For Labour, shadow home secretary Yvette Cooper said: “Marriage as an institution has undergone repeated reform and modernisation over hundreds of years and needs to again now to reflect the equal value we place on long-term loving relationships for same-sex couples too.”

Permanent link to this article: https://operationfatherhood.org/family-law-private/marriagefamily-life/walesengland-gay-marriages-government-publishes-legislation/