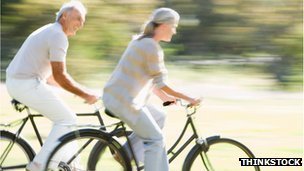 Retired people have fewer options for paying off debt as their incomes shrink says the study.

Elderly couples who struggle with debt are more than twice as likely to suffer marriage breakdown than those whose finances are steady, research suggests.

Old people can be as harmed by debt as younger groups, argues the Age-UK and International Longevity Centre study.

Retired people’s budgets have been squeezed by high energy prices and poor returns on savings and investments, say the authors.

More debt advice is needed for old people in England, they argue.

The authors found “a statistically significant decrease in quality of life”, among those whose debts became a problem, adding that they were more than twice as likely to experience partnership breakdown as those who stayed in control of their finances.

“This pattern was not found among those who entered unsecured credit arrangements but were not in problem debt. This suggests that problem debts could have contributed to the breakdown,” says the study.

Overall, the analysis found that the while vast majority of older people either did not have unsecured debts or were managing them well, a growing proportion of those with unsecured debts were finding them a problem.

The authors define people as being in problem debt if they spend more than 10% of their income on repaying it if they are very poor – or 25% if they are wealthy.

However, the authors found that the amounts owed by people with problem debts rose over this period so the problem became more concentrated in a smaller group of people.

People can be tipped into problem debt by unexpected bills such as having to replace an appliance, say the authors.

They warn that the options for paying off unsecured debts narrow as people grow older and have fewer options to earn money.

Those most at risk of problem debt are most likely to be unemployed, or self employed and to be renting or still paying off a mortgage, the researchers add.

The report also warns that while older pensioners may be debt averse and unlikely to borrow on credit cards, debt may grow among pensioners as people more used to paying on credit reach retirement age.

Michelle Mitchell of Age UK said: “There is a small group of older people who are facing the nightmare of increasingly serious debt problems.”

“While it is good news that overall debt among the older population is falling, this research, supported by evidence from other charities, sends a clear warning that funding for debt and money advice for older people must be protected and expanded.

“Debt advisors need to understand the specific needs of older people often living on low fixed incomes and particular attention must be paid to those moving into self-employment or who have recently become unemployed.”

The report draws on figures from the English Longitudinal Study of Ageing which focuses on people aged over 50 and has produced figures every two years since 2002. The most recent data is from 2010.

Permanent link to this article: https://operationfatherhood.org/family-law-private/marriagefamily-life/walesengland-debt-problems-may-fuel-divorce-among-older-couples/