Plans for some married couples to get tax breaks worth up to £200 a year have been announced by David Cameron. 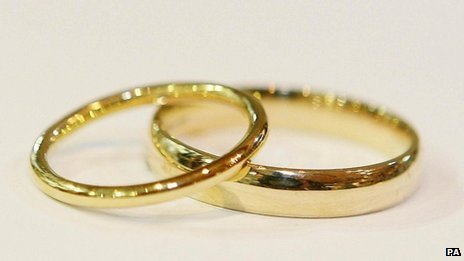 The prime minister said four million couples would benefit from a £1,000 transferable tax allowance from 2015.

The move, announced ahead of the Tory conference, comes after a deal with the Liberal Democrats to introduce free school meals for children under eight.

Labour said Mr Cameron was “out of touch” if he thought the people would get married “for £3.85 a week”.

The tax break would apply if couples are both basic rate tax payers with one spouse earning less than the personal allowance – the amount of income you can receive each year without having to pay tax on it. This will be just over £10,000 in 2015.

The measure would also include 15,000 couples in civil partnerships.

The basic tax rate of 20% is currently in place for up to £32,010 of taxable income. That means that – including a personal allowance – at current rates people would have to earn less than £41,451 a year to be eligible.

Benefits from the scheme would come through initially at the end of the tax year in 2016.

Writing in the Daily Mail, Mr Cameron said: “I believe in marriage. Alongside the birth of my children, my wedding was the happiest day of my life.

“Since then, Samantha and I have been a team. Nothing I’ve done since – becoming a Member of Parliament, leader of my party or prime minister – would have been possible without her.

“There is something special about marriage: it’s a declaration of commitment, responsibility and stability that helps to bind families.

“The values of marriage are give and take, support and sacrifice – values that we need more of in this country.”

He later tweeted: “The £1000 marriage tax allowance will apply to straight and gay couples, as well as civil partners. Love is love, commitment is commitment.”

The Archbishop of Canterbury Justin Welby praised the initiative, saying in a statement: “We welcome all support for married life and we’re pleased that this initiative includes both married couples and those in civil partnerships.”

Mr Cameron said stay-at-home mothers and women who worked part-time would be the main winners.

Explaining how the scheme would work, he wrote: “From April 2015, if neither of you are higher rate taxpayers, you will be able to transfer £1,000 of your tax-free allowance to your spouse.

“In effect, if you pay the basic rate of tax and your partner doesn’t use all of their personal allowance, you’ll be able to have some of it.

“Most couples who benefit will be £200 a year better off as a result.”

He promised tax breaks for married couples when he ran for the leadership of his party in 2005, and it was also part of the Conservative election manifesto in 2010.

The Liberal Democrats are opposed to the measure but under the coalition agreement they would not be able to vote against it in any parliamentary vote but could abstain.

The party’s Treasury spokesman Stephen Williams branded the move “a tax cut for some, paid for by everyone else”.

He said: “You don’t build a fairer society by using the tax system to favour one type of family over another.

“We should support all families, not just the minority of married ones where one person stays at home.”

It has been suggested the Lib Dems were able to announce plans for every child in England between reception and year two to get free school lunches in exchange for the Conservative’s proposed tax break.

The free school meals policy will begin in September next year and will be worth about £437 per child.

Paul Johnson, director of the Institute for Fiscal Studies said that each political party had launched policies which were roughly equal in their cost.

“Each one is a small lollipop in the context of £25bn of cuts being expected over the following two years – none of them have said much about how they’re going to do that.”

Labour said the Conservatives were “out of touch” and the move was outweighed by higher VAT and cuts to child benefit and tax credits.

Ed Miliband’s party said around two-thirds of married couples would not save money under the plans, including higher rate taxpayers and couples in which both partners earn more than the personal allowance.

Shadow chief secretary to the Treasury Rachel Reeves said: “The vast majority of children will see their parents get not a single extra penny from this so if you are a mum and dad and you’re both earning £20,000-£25,000 a year, so on average earnings, you won’t get any extra support.

“So it’s not a proper tax allowance for married couples. And even for those who do benefit it’s just £3.85 a week.”

But Conservative Health Secretary Jeremy Hunt said the policy recognised the value of the institution of marriage.

“It is an institution that is the building block of our society and we want to recognise that and this is a measure that’s going to help four million hard working couples where life is pretty tough.”

Dr Samantha Callan, the director of families at the think tank Centre for Social Justice that seeks to address poverty and its causes, also welcomed the announcement.

“We did a report into the state of the nation and why family breakdown is such a problem in the UK today. Half of all children born today will not still be with both their parents by the time they’re 15 and marriage is a more durable relationship.”

She added: “Ninety-three percent of all couples still together by the time the child is 15 are married.”

Tim Yeo, the Conservative MP for South Suffolk, told BBC Radio Suffolk that while he welcomed any institutions that support stability in society, in 2013 marriage “is not the only model for a family”.

“I don’t see why, for example, someone who has been widowed, whether it’s a man or a woman, at a young age, and is trying to bring up children perhaps on a relatively low income, I regret the fact that the current proposal may exclude those people,” he said.

Campaign group Don’t Judge My Family criticised the move as “promoting a fantasy 1950s family” and it would not benefit many of the families who needed most support..

The Conservative Party conference takes place in Manchester from Sunday. Mr Cameron will close the conference with his keynote speech on Wednesday.

David Cameron and the Conservative party made a solemn commitment eight years ago.

He told them marriage should be recognised in the tax system.

Come the 2010 election campaign he renewed his vow.

Some backbenchers doubted he would make good on his pledge in this parliament.

As their conference begins, they are reassured, although they will fight for the tax break to be bigger in future.

The prime minister says he is not trying to bribe people to to get married or engage in social engineering.

Critics will ask why the government should spend £700m a year on a policy that is not designed to change anyone’s behaviour.

Permanent link to this article: https://operationfatherhood.org/family-law-private/marriagefamily-life/walesengland-david-cameron-unveils-marriage-tax-breaks-plan/