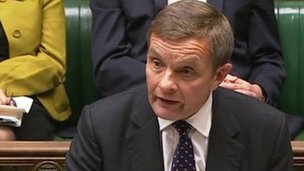 David Jones said he did not believe same-sex couples should be prevented from adopting children
The Welsh secretary has said gay couples “clearly” cannot provide a “warm and safe environment” in which to raise children.

On ITV Wales’ Face to Face programme, David Jones said this was why he had voted against the government’s legislation for same-sex marriage.

The Conservative MP said he was not homophobic and had “people in my life who are important to me who are gay”.

But Labour said the comments showed “the nasty party is alive and well”.

MPs were given a free vote on same-sex marriage legislation in the Commons last week, meaning that they were allowed to vote according to their consciences and did not face sanctions for taking an opposing view to their party leaders.

Prime Minister David Cameron is a strong supporter of same-sex marriage, but Mr Jones was one of two cabinet ministers to vote against it.

The Welsh secretary told ITV: “I regard marriage as an institution that has developed over many centuries, essentially for the provision of a warm and safe environment for the upbringing of children, which is clearly something that two same-sex partners can’t do.

“Which is not to say that I’m in any sense opposed to stable and committed same-sex partnerships.”

He said he believed his constituents were “overwhelmingly” opposed to the government’s plan to allow same-sex couples to marry or convert their civil partnerships to marriages.

In a statement after the interview, Mr Jones added: “I made the point of stressing that I was fully supportive of committed same-sex relationships. I also strongly approve of civil partnerships.

“I did not say in the interview that same-sex partners should not adopt children and that is not my view.

“I simply sought to point out that, since same-sex partners could not biologically procreate children, the institution of marriage was one that, in my opinion, should be reserved to opposite sex partners.”

“That such views exist in the heart of the Tory cabinet provides yet more evidence of how out of touch the Tories are with modern Britain, and how David Cameron’s claim to have changed his party is, like so many of his promises, nothing more than empty words,” the Labour MP said.

“David Jones’s comments are profoundly offensive and he should apologise immediately.”

The director of campaign group Stonewall Cymru, Andrew White, said: “We’re saddened that the secretary of state for Wales should make such an offensive and inaccurate remark.

“There are many different types of family in Wales today, including many same-sex couples raising children. It’s deeply undermining to families and children when they hear this sort of ill-informed comment.

“Fortunately, recent YouGov polling for Stonewall Cymru shows that the secretary of state’s views are out of touch with the majority of people, both in Wales and throughout Great Britain.”

Permanent link to this article: https://operationfatherhood.org/family-law-private/marriagefamily-life/walesengland-cabinet-minister-gay-couples-cannot-provide-safe-environment-for-children/