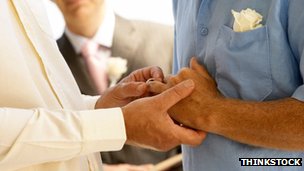 Some peers have suggested plans to legalise same-sex marriages could allow town halls to “bully” organisations who refuse to conduct services.

The Marriage (Same Sex Couples) Bill states that no religious organisation can be compelled to marry gay couples.

But crossbencher Lord Singh said they could fall foul of equality laws and be bullied by public authorities which provide them with services.

But minister Lord Wallace said any body doing so would be “acting unlawfully”.

The controversial bill has been backed by the Commons and is now being debated in detail by peers.

But independent peer Lord Singh of Wimbledon told peers stronger safeguards were needed. He argued that those organisations who did not sign up to same sex marriage could find themselves disadvantaged by equality laws.

“We all know those in authority can and often do misuse their authority to intimidate or bully others in employment or those who approach them for goods and services,” said Lord Singh.

“There is a real danger that if this legislation comes into force some will use it to try and convert those who believe in traditional marriage to their way of thinking.”

Another crossbencher, Baroness O’Loan, who argued there was a risk that religious bodies which did not opt in to same-sex marriage could be treated “less favourably” by public authorities for issues like funding.

And former Archbishop of Canterbury Lord Carey of Clifton asked for further assurances that ministers refusing to carry out religious blessings for same-sex couples would not get into trouble with the law.

But former Conservative cabinet minister Lord Deben said the bill was not about blessings and church leaders should not try to load the legislation with all sorts of unnecessary “bits and pieces”.

Labour’s leader in the Lords, Baroness Royall, said the existing bill was “absolutely clear” and amendments aimed at strengthening religious protections would be confusing.

For the government, Advocate General for Scotland Lord Wallace of Saltaire said it was “absolutely right” that organisations and people should be free to decide whether or not to conduct same sex marriages “without fear or repercussion or penalty of any kind”, protected by the Bill.

“As the law stands a public authority would in fact be acting unlawfully if it attempted to rely on the public sector equality duty to treat a religious organisation adversely simply because that organisation did not wish to conduct same sex marriages as explicitly allowed under this Bill.”

Peers also discussed Labour peer Lord Harrison’s call for humanist weddings, which are legally invalid in England and Wales but legal in Scotland, to be recognised in law for same-sex and heterosexual couples,

Permanent link to this article: https://operationfatherhood.org/family-law-private/gay-marriage/walesengland-gay-marriage-peers-urge-protection-from-equality-law/