UK – Elena Ambrosiadou wins legal battle with ex-husband Martin Coward over software: They might be rich – but judge isn’t buying it in ‘toxic’ divorce 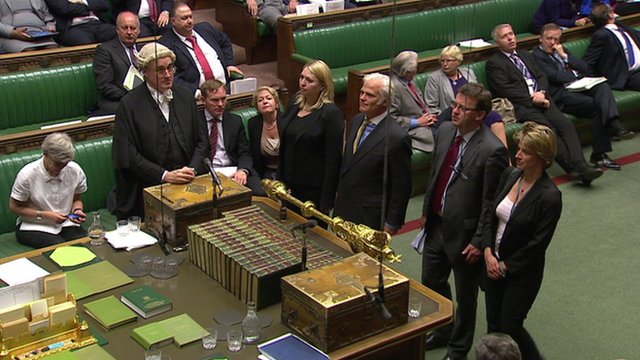 Chris Mason reports on the votes in the House of Commons

Plans to legalise gay marriage in England and Wales are to proceed unimpeded in Parliament after ministers reached agreement with Labour.

Conservative critics had tabled a proposal to let heterosexual couples enter into civil partnerships, if gay couples were allowed to get married.

This was defeated by 375 votes to 70 after a five-hour Commons debate.

Instead, MPs backed a Labour plan to consult on changing civil partnerships – a move criticised by some Tory MPs.

Speaking in the House of Commons, Culture Secretary Maria Miller thanked other parties for their “unwavering support” for the principles of the same-sex Marriage Bill and said a review of civil partnerships could take place “very swiftly”.

Labour said the review could potentially take place within the next few months – enabling its findings to be reflected in the final legislation – but one Conservative MP described the sequence of events as a “grubby deal”.

MPs gave their support in principle to gay marriage in February but are now discussing proposed amendments on Monday and Tuesday amid calls from some Conservatives for the government to focus on other priorities.

The bill is being debated over two days, with its third reading – the final hurdle in the Commons – on Tuesday. If approved, it will go to the House of Lords on Wednesday, where it is expected to face further opposition.

David Cameron has said equal marriage would help build a stronger and fairer society but nearly half of all Tories voted against it in February and many party activists remain deeply opposed to it in principle.

The bill’s fresh scrutiny by MPs comes amid other divisions within the Conservative Party on Europe and attitudes towards the party’s grassroots.

MPs get a free vote on the Marriage (Same Sex Couples) Bill because it is considered an issue of conscience and many Conservative MPs spoke out against the principle of gay marriage.

Former defence minister Sir Gerald Howarth said the plans were “divisive” and suggested there were are plenty of people “in the aggressive homosexual community who see this as but a stepping stone to something even further”.

A group of Tory MPs, led by former Conservative minister Tim Loughton, attempted to amend the bill, with a plan to extend civil partnerships – which came into force in 2005 – to heterosexual couples.

Mr Loughton rejected claims the move was a “wrecking” measure, arguing that the extension of civil partnerships to co-habiting heterosexuals would address a “glaring inequality” in the current proposals as well as encouraging family stability.

“If this amendment is passed, it will remove some of the anomalies and flaws in this bill and make the bill more palatable.”

He warned about any review on civil partnerships being “kicked into the long grass”, adding that Parliament “was in danger of being party to a last minute stitch-up between the frontbenches”.

Ministers initially agreed that the status of civil partnerships should be reconsidered by 2019, with the scope to do it sooner if approved by Parliament.

Ms Miller told MPs there were “fundamental policy” issues that needed to be considered with “financial implications”, such as pension entitlements for heterosexual civil partners, widows and widowers.

But while it would not be “responsible” to legislate at the moment, she said she respected the strong views on the matter in Parliament and would back calls for an immediate review.

It was initially suggested Labour’s equalities team might support Mr Loughton’s amendment but it later put forward its own compromise proposal for an immediate consultation.

“We are certainly anxious to do all we can to ensure that same-sex marriages arrives as swiftly as possible on the statute book,” shadow equalities minister Kate Green said.

“We would not want to see anything put that ambition in jeopardy.”

Deputy Prime Minister Nick Clegg said it was his party’s position to extend civil partnerships to everybody, irrespective of their sexuality but the current bill could not be derailed.

Without holding a formal vote, MPs approved plans to hold an immediate review after the leadership of all three parties backed it.

While failing in their attempts to amend the legislation in any form, Conservative MPs voiced their concerns in large numbers on a range of issues.

A proposal which would have allowed civil registrars to opt out of presiding over gay marriages on grounds of conscience was backed by 150 MPs – including Cabinet ministers Iain Duncan Smith and Owen Paterson – although 340 voted against.

In a subsequent vote, 148 MPs supported an amendment to protect the religious beliefs of a person who believes that marriage is defined as being between a man and a woman but 349 MPs voted against.

Stonewall, which campaigns for equality for gay, lesbian and bisexual people, said it would be a “terrible pity” if the legislation got “bogged down” and urged MPs from all parties not to “play politics” with it.

Under the bill, the Church of England and the Church in Wales would be banned from offering same-sex marriages because of their strongly stated opposition, unless they changed canon law.

Other religious organisations would be able to “opt in” to holding ceremonies. There are currently no plans for similar legislation in Northern Ireland, but there are already plans for a bill to allow same-sex marriage in Scotland.

The UK debate comes the week after France became the ninth European country, and 14th in the world, legalise gay marriage. Earlier this month Rhode Island became the 10th US state to allow same-sex marriages.

Permanent link to this article: https://operationfatherhood.org/family-law-private/gay-marriage/walesengland-gay-marriage-deal-to-allow-bill-to-proceed-in-parliament/