ENGLAND – Slight drop in Care applications in May

UK – ‘A million children growing up without fathers’

Most lone parent households are led by mothers 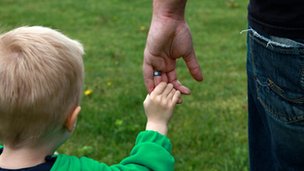 A million UK children are growing up without a father in their lives, says a new report on family breakdown.

The Centre for Social Justice report says lone parent families are increasing by more than 20,000 a year, and will top two million by the next general election.

In some areas fatherlessness has reached such high levels that they are virtual “men deserts”, it adds.

And it accuses politicians on all sides of a “feeble” response.

The report says the number of single parent households has been rising steadily over the past 40 years, and that now 3m children are growing up predominantly with their mothers.

This has led to a huge number of children growing up without a meaningful relationship with their fathers – which the report defines as contact twice a year or more.

The absence of fathers is linked to higher rates of teenage crime, pregnancy and disadvantage, the report says, warning that the UK is experiencing a “tsunami” of family breakdown.

And it highlights areas of the UK with very high levels of lone parent households – although this does not necessarily mean the children living in them have no contact with their fathers.

In one neighbourhood in the Riverside ward of Liverpool, there is no father present in 65% of homes with dependent children. Liverpool has eight out of the top 20 areas with the highest levels of fatherless households.

There are 236 pockets of towns in England and Wales where more than 50% of households with dependent children are headed by a lone mother.

And an area in the Manor Castle ward of Sheffield tops the lone parent league table – among households with dependent children, 75% are headed by a lone parent.

CSJ director Christian Guy says: “For children growing up in some of the poorest parts of the country, men are rarely encountered in the home or in the classroom. This is an ignored form of deprivation that can have profoundly damaging consequences on social and mental development.

“There are ‘men deserts’ in many parts of our towns and cities and we urgently need to wake up to what is going wrong.”

The CSJ report recalls David Cameron’s election pledge to lead the “most family-friendly Government ever”.

Yet, in power, the family stability agenda “has barely been mentioned”. Comprehensive action to tackle existing policy barriers to family stability “has been almost entirely absent”, it adds.

The report calls for concrete steps to encourage marriage, including transferrable tax allowances for married couples.

The Department for Communities, Local Government and the Regions responded highlighting its programme for highly troubled families.

A DCLG spokesman said the programme was helping to get thousands of children back into school, reduce youth crime and anti-social behaviour and put parents on a path back to work, as well as reducing costs to the taxpayer.

“In the first year of the three-year programme councils had already identified 66,000 fully eligible families and were working with over 35,000. This is good progress considering many services have been established from a standing start and puts us on track to work with 120,000 families by 2015.”

Permanent link to this article: https://operationfatherhood.org/family-law-private/fatherlessness/uk-a-million-children-growing-up-without-fathers/