Domestic violence is considered “a norm” by too many men and some women, Theresa May said 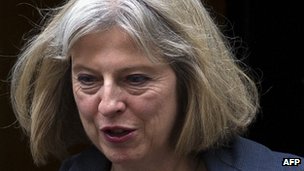 Theresa May has been in talks with Her Majesty’s Inspectorate of Constabulary (HMIC), which assesses the police, about possible improvements.

In a BBC interview, she said there were still too many women being abused.

Mrs May also said too many young men – and even some young women – thought violence in a relationship was normal.

She told BBC Radio 4’s The World at One she had been talking to HMIC “about them looking into this whole question of police response”.

“I would intend to be making a formal announcement on this to Parliament fairly soon,” she said.

“But I think there are a number of agencies that we need to bring in in relation to this and certainly we would be looking as well to the College of Policing in terms of the sort of training and the sort of standards that are developed.”

Speaking to The World at One she rejected the idea of a public inquiry, saying that would take too long.

Last year, police used “community resolutions” – where the offender must apologise to the victim but is not prosecuted – in 2,488 domestic violence cases.

The Association of Chief Police Officers says such resolutions should only be used for low-level crime.

In the interview, Mrs May also said public attitudes must change if the issue was to be tackled.

“There are still too many cases – too many women up and down the country who suffer from domestic abuse,” she said.

“Too many young men, and in some surveys it shows young women as well, think that some form of abuse or violence within a relationship is a norm – part of a relationship.”

There are also concerns that the quality of the police’s response to domestic violence varies dramatically from force to force – and Ms Cooper called for Mrs May to set national standards.

Polly Neate, of the charity Women’s Aid, said all UK children should have “high-quality” education about sex and relationships to help counter attitudes that foster domestic violence.

She also called for more police officer training, but warned that 30% funding cuts to support services last year meant police were limited in the kind of support they could provide.

She also warned that refuges were being “decimated” by local authority funding cuts.

“It is a national problem requiring a national solution – and funding on a national level to protect the services that make the difference between life and death,” she said.

Permanent link to this article: https://operationfatherhood.org/family-law-private/domestic-violence/walesengland-theresa-may-to-demand-police-improve-domestic-violence-handling/