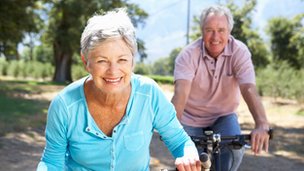 Elderly people in the UK should be offered more relationship support to help them cope with older age, the Relate charity says.

Relationships play a critical role in dealing with the pressures of old age, but can fracture if they are not nurtured, costing the state more money.

Relate calls for a coherent government strategy and for support and counselling to be prescribed by GPs.

In a report, the charity calls for a new post of minister for ageing.

The report, jointly published with the New Philanthropy Capital, entitled Who Will Love Me When I’m 64?, suggests there are changes in the nature of relationships of elderly couples today compared with the previous generation.

Divorce rates of men and women over 60 increased between 1991 and 2011, it notes, whereas those of younger couples have fallen in the past 10 years.

There has been debate about “silver divorce”, but the report said it was not clear if those divorcing tended to be the recently married or whether long-term partnerships were breaking down.

It pointed out that baby boomers, defined as those born between 1946 and 1964 – today’s pensioners – had “married young and in great numbers”. But “they were far more likely to divorce than their parents”, it said.

It added: “Alongside these rising divorce rates, the latter half of the 20th Century saw an increase in cohabitation and remarriage, and the formation of stepfamilies and extended families.

“In general, the couple and family relationships of baby boomers have been characterised by greater fluidity than those of their parents’ generation.”

And the greater tendency for relationship breakdown matters because, the report says, good-quality relationships are key to success and well-being in older age.

“When people have strong and stable relationships with family, partners and friends, their need for care is reduced, because that role is often played by the people around them.

In a poll of 1,000 over-50s for Relate, more than eight out of 10 believed relationships were the most important requirement for a happy retirement.

But one in five, which equates to some four million people if extrapolated to the whole UK, lacked the confidence to build new relationships, the poll suggested.

But she argued that relationships were largely missing from the wider debate about an ageing society.

She said: “We know from this report that good relationships have a direct impact on health and wellbeing, and that loneliness and isolation have negative impacts on both our health and wider society.

“With one in five older people lacking the confidence to form new friendships and relationships, we are looking at a future in which four million people could be facing loneliness and isolation.

“Without a minister of state for ageing society, we will not see a coherent strategy which ensures that we don’t drift into an old age that we don’t want.”

Dan Corry, chief executive of New Philanthropy Capital, said: “There are many pressures which growing older puts on relationships. People’s identities change when they leave the workplace. Declining health and shifting dynamics at home are all challenges.

“But with the right support, the evidence suggests that relationships can play a key role in making later life a positive experience for older people and also for society as a whole.”

Permanent link to this article: https://operationfatherhood.org/family-law-private/divorce-2/walesengland-elderly-couples-need-more-relationship-guidance/