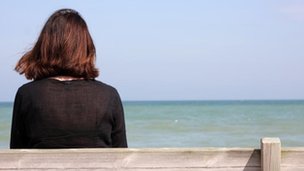 There were 117,500 divorces in England and Wales last year

Many people going through divorce could be hiding their wealth from their partners, a survey suggests

Nearly a quarter of divorcees questioned for a survey said they had tried to hide financial assets to “keep them secure”.

In two recent court cases, men have been sentenced to jail for allegedly not disclosing full details of their wealth.

One was given a two-year jail term.

Just over 40% of marriages end in divorce in England and Wales, according to statistics.

The survey, carried out for The Co-operative Legal Services by Onepoll, found that just under a quarter of 800 divorced people questioned said they had tried to hide some of their finances or items from their partners.

Women were more likely to admit this, researchers said.

The survey, which was not nationally representative, was carried out online among people in the UK at the end of last month.

Christina Blacklaws, director of family law at The Co-operative Legal Services, said couples had a legal obligation to divulge financial information and failure to do so could lead to jail.

“Married couples are each potentially entitled to a share of the value of any property that either or both own at the time of their divorce. This includes assets acquired before and during the marriage and after separation,” she said.

“Lawyers for either party can instruct accountants to go through the financial affairs of a husband or wife whom they suspect has deliberately undervalued their wealth but in many cases it falls to solicitors to try and draw these things out of their clients.”

The lawyers say common ways used to conceal wealth include:

Of the people questioned in the survey, about one in seven said their “main objective” after deciding to get divorced had been “revenge”.

Divorce lawyer Ayesha Vardag said the recent court cases had marked a change in attitude among judges to the hiding of assets.

“Failure to disclose has been on the rise for years and the reason for that is that penalties… have not been enforced,” she said.

“There are serious penalties, including contempt of court and potential imprisonment and perjury but the bottom line is that no-one has been doing anything about it. People either get away with it or get caught out and nothing very dramatic happens.

“Therefore people who are morally ambivalent about lying under oath have [had] an incentive to do that.”

In the two recent court cases, men were given jail terms under contempt of court rules over allegedly failing to disclose full details of their incomes and assets.

Permanent link to this article: https://operationfatherhood.org/family-law-private/divorce-2/uk-divorcing-couples-often-hide-assets-survey-suggests/