London riots: Absent fathers have a lot to answer for 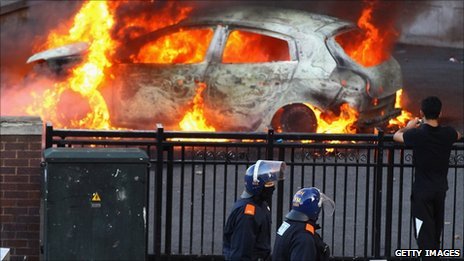 Many theories have been posited about the underlying causes of the riots in England – from moral decay to excessive consumerism. Here two criminologists give their views on some of the arguments.

Sir Max Hastings, in an article for the Daily Mail, focused on “a perverted social ethos, which elevates personal freedom to an absolute, and denies the underclass the discipline – tough love – which alone might enable some of its members to escape from the swamp of dependency in which they live”.

There is a culture of entitlement in the UK, says David Wilson, professor of criminology at Birmingham City University and a former prison governor.

“It’s not just about a particular class, it permeates all levels of society. When we see politicians claiming for flat-screen TVs and getting jailed for fiddling their expenses, it’s clear that young people of all classes aren’t being given appropriate leadership.”

Writing in the Independent, Kids Company charity founder Camila Batmanghelidjh blamed a society in which the “established community is perceived to provide nothing… It’s not one occasional attack on dignity, it’s a repeated humiliation, being continuously dispossessed in a society rich with possession”.

Studies do suggest that living in areas of social deprivation could be a factor, says Marian FitzGerald, visiting professor of criminology at the University of Kent.

“But the socially excluded are not always the ones who are rioting – in fact they are often the ones who are most vulnerable to riots. We need a better thought-out approach rather than just using social exclusion as an excuse.”

According to Cristina Odone of the Daily Telegraph, the riots could be traced back to a lack of male role models: “Like the overwhelming majority of youth offenders behind bars, these gang members have one thing in common: no father at home.”

“I brought up two boys on my own,” says Prof FitzGerald. “Yes, there are some issues about where boys get a positive sense of masculinity from when they don’t have anyone in the home to give it. But if you have a stable family set-up then these kids can still be very high-achieving.”

Speaking on the BBC’s Newsnight, Labour’s candidate for London Mayor, Ken Livingstone, suggested that austerity measures were responsible: “If you’re making massive cuts, there’s always the potential for this sort of revolt against that.”

It’s too soon to say this, Prof FitzGerald says. “The full implementation of the cuts to local authority services that will have the biggest impact on these areas will not be fully felt until next year.

“However, it may be that because there’s been so much talk about police spending cuts, the rioters may have internalised the message that they’re less likely to be caught.”

In a leader, the Sun newspaper said it was “crazy” that water cannon was not available to officers, and that parliament “must not be squeamish” about the use of tear gas and baton rounds.

There has also been discussion about the impact of the fall-out from criticism of policing during the G20 protests in London in 2009. Some commentators have suggested officers might be afraid of taking on the rioters directly for fear of legal action.

It may have made some difference if the rioters had been more immediately engaged with a more robust form of policing, says Prof Wilson.

“Several of the rioters who were interviewed clearly enjoyed the feeling of being powerful. They were encouraged to feel that the cities in which they were misbehaving belonged to them.

“However, I don’t think that has anything to do with political correctness. What has characterised British justice over the past 25-30 years is the large numbers of young people we have sent to prison compared with our European neighbours.”

Violence began in Tottenham on Saturday after the fatal shooting by police of Mark Duggan, a 29-year-old black man. Christina Patterson of the Independent said the race factor could not be overlooked: “Too many black men have been killed by the police. Too many black men and women have been treated like criminals when they’re not. This is not the cause of these riots, but it’s there in the mix.”

“According to IPCC reports in the last three years there have only been seven and all of those – including the shooting of Raoul Moat – were of white people.

“The Met police has seen huge changes in attitude since the Macpherson report. That said, its use of section 60 stop-and-search powers disproportionately brought normally law-abiding young black people in particular into potentially confrontational encounters with the police.

“However, this is not true of many of the other police forces who are now facing similar threats to public order – so it cannot be used as any sort of excuse.”

Paul Routledge of the Daily Mirror blamed “the pernicious culture of hatred around rap music, which glorifies violence and loathing of authority (especially the police but including parents), exalts trashy materialism and raves about drugs”.

“I once interviewed a boy who said ‘just because I like the music doesn’t mean I agree with the lyrics’, which is true,” says Prof FitzGerald. “But it may be a factor when it comes to those who may be particularly susceptible.”

“These are shopping riots, characterised by their consumer choices,” insisted Zoe Williams of the Guardian. She added: “This is what happens when people don’t have anything, when they have their noses constantly rubbed in stuff they can’t afford, and they have no reason ever to believe that they will be able to afford it.”

In studies of street crime, this has been shown to be a factor, says Prof FitzGerald.

“But with the recent riots, I’m not so sure – in the context of looting, it’s about taking what you can. As well as mobile phones and clothes, there were plenty stealing petty things like sweets and cans of beer.”

“As more and more people became embroiled in the riots, others have been tempted to join them, confident that one unexceptional individual in a sea of hundreds is unlikely to be caught or to face retribution,” according to Carolina Bracken writing in the Irish Times.

This is credible, says Prof Wilson. “Opportunism, mixed with a sense of being in a big gang, will have enticed many who wouldn’t necessarily do something like this normally.

“Social media and other methods have been used to organise these levels of greed and criminality,” Steve Kavanagh, the deputy assistant commissioner of the Metropolitan police, told reporters.

This is an under-explored phenomenon, suggests Prof Wilson.

“For years we’ve been aware of gangs and football hooligans have been using technology to get together and fight. I think the police have been quite slow to respond to this.

“But as we know, mobile phones can also be used to counteract criminality and to an extent I think that’s something the police prefer to downplay.”

Permanent link to this article: https://operationfatherhood.org/dwp-department-for-work-and-pensions/social-exclusion-welfare/the-competing-arguments-used-to-explain-the-riots/