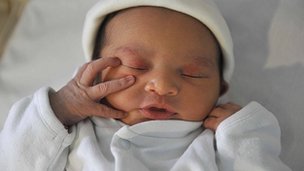 Child benefit has been universal for 60 years

David Cameron has said the government is looking again at the impact on some families of its proposed changes to child benefit for the better-off.

From April 2013, families where one parent earns more than about £44,000 a year are set to lose the benefit.

Critics say the move would penalise families where both parents work.

In a magazine interview, Mr Cameron acknowledged the changes could create a “cliff-edge” effect and the Treasury was examining their implementation.

However, Mr Cameron gave no indication that the policy – announced by Chancellor George Osborne in October 2010 – would be altered.

‘Unfairness’Campaigners say anomalies in the proposals would mean that some parents will lose thousands of pounds if their income rises above the 40% tax threshold, currently about £44,000 but due to fall to about £42,000 in 2013.

While a couple with three children could lose around £2,500 if one parent earns just a few pounds over the threshold, even if the other is unemployed, another couple where both parents each earn just under £44,000 and enjoy a total household income of more than £80,000 will keep all their benefit.

In an interview with The House Magazine, Mr Cameron suggested he did have some concerns over how the proposed changes were structured.

“Some people say that’s the unfairness of it, that you lose the child benefit if you have a higher-rate taxpayer in the family (but) two people below the level keep the benefit,” he said.

George Osborne will deliver his third Budget – where tax and spending changes are traditionally announced – in March.

Mr Osborne has defended the child benefit cut – which could save up to £1bn a year – as tough but necessary, saying those on higher incomes must contribute their share to helping cut the budget deficit.

Labour have criticised the proposals, saying they have caused “huge anxiety” and that all families need support in tough times.

Permanent link to this article: https://operationfatherhood.org/dwp-department-for-work-and-pensions/child-benefit/uk-cameron-hint-over-child-benefit-cuts-for-better-off/