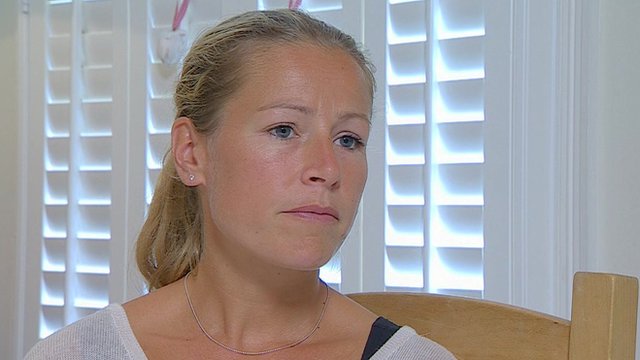 Mother Kim Levine: “Everything seems more expensive than it was a few years ago”

Families are struggling as the cost of bringing up a child has risen to £148,000, according to research for the Child Poverty Action Group charity (CPAG).

The report, co-funded by the Joseph Rowntree Foundation charity, says costs have risen by 4% over the last year.

At the same time, it says the value of benefit payments fell in real terms.

But the government said it was helping families by cutting income tax for 25 million people.

The CPAG says parents face a “growing struggle” to provide a decent standard of living for their families.

“This research paints a stark picture of families being squeezed by rising prices and stagnant wages, yet receiving ever-diminishing support from the government over the course of the last year,” said Alison Garnham, the chief executive of the CPAG.

The report points out that benefits payments rose by only 1% in April this year, as a result of the government’s welfare changes.

It adds that the minimum wage rose by 1.8%, average earnings rose by 1.5%, and child benefit was frozen.

But the cost of living rose sharply for many families, especially for those who need child care.

The cost of that rose by 5.9% in the last year, said the CPAG. It added that many low-income families had seen cuts in housing support, and many non-working families had had to make their first contributions to council tax.

Kim Levine, a single mother with two children from south London, told the BBC she found the cost of child care particularly high.

“Child care is so much that I try and avoid it almost. My wages definitely haven’t gone up in the last few years, and yet my weekly food shop has,” she said.

“The task of making ends meet for families with children has always been hard, but is getting harder,” said Katie Schmuecker of the Joseph Rowntree Foundation.

“Balancing family budgets has become a perilous and delicate act for hard-pressed parents,” she said.

The government has repeatedly defended its benefits reforms, saying it needs to cut the bill to tax-payers.

It also says the reforms are designed to encourage more people to go out to work.

“We know times are tough, and we are securing a recovery for everyone who wants to work hard,” said a government spokesperson.

“That is why we are taking action to help families with the cost of living by cutting income tax for 25 million people, which will save a typical taxpayer over £700, taking 2.7 million out of income tax altogether and freezing council tax for five years, saving a typical household £600.”

In January, a report from the insurer LV suggested that the cost of bringing up a child to the age of 21 in the UK was £222,000.

A report from the US government this month said it cost £154,000 to raise a child to the age of 18 in the United States.

Permanent link to this article: http://operationfatherhood.org/welsh-government/child-poverty/walesengland-families-struggling-as-child-costs-rise-says-cpag/