WALES – Social services are on the right track make a difference 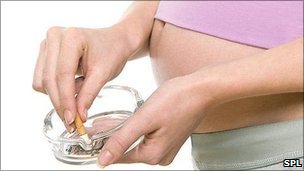 Smoking women are more at risk of having a premature baby

Wales has the highest rates in the UK of women who smoke, drink and are obese during pregnancy.

Her report into midwifery care in Wales called for midwives to be involved in schemes to encourage healthy lifestyles.

The Royal College of Midwives said women being overweight and smoking put a baby’s health at risk.

“Our role is to see that supervisors support midwives in getting to grips with the public health agenda and intervene early,” said Ms Ness.

“[It’s about] Giving public health messages to women, trying to ensure they choose more healthy lifestyles rather than having to pick up the trouble that comes from that later on when they are pregnant or as they approach the time of delivery.”

The report highlights “significant public health challenges in Wales such as teenage pregnancy, obesity and continued high rates of smoking and drinking”.

It does not recommend a course of action, but insists that midwives should be “involved in initiatives to influence best practice”.

Obesity is a major factor behind an increase in the number of women giving birth by Caesarean section in Wales.

But she added: “There are some very successful programmes in Wales.

“There’s one in Cardiff where the midwives have worked with Slimming World to get women to start dieting in pregnancy on a very controlled pattern and it’s been very successful.

“That continues then because it changes their lifestyle.”

With smoking, she said it was a habit that led to specific risks to the baby.

“Smoking mothers are at more risk of having a premature baby or a low birth weight baby,” she said.

“Smoking affects blood vessels but can affect the way the placenta works.

“We would encourage people strongly to give up smoking.”

Permanent link to this article: http://operationfatherhood.org/other/healthpregnancy/wales-reports-pregnancy-health-concern-in-wales/