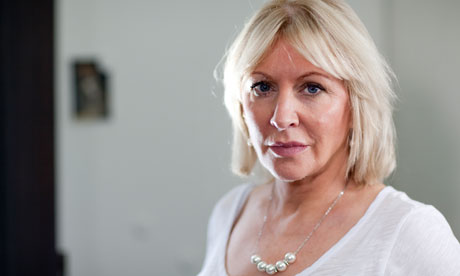 MP Nadine Dorries says 60,000 terminations a year could be prevented if women were offered ‘independent’ counselling Photograph: David Levene
Charities warn of ‘distress and delay’ as they are stripped of principal responsibility to counsel women seeking a termination

The government has caved in to calls from anti-abortionists to overhaul existing protocols and strip charities and medics of their exclusive responsibility for counselling women seeking to terminate a pregnancy.

The Department of Health confirmed that it would change the rules to ensure that women are also offered counselling “independently” of existing abortion services. Its announcement was made in advance of an attempt next week led by the Tory backbencher Nadine Dorries to amend the health and social care bill to force such a requirement. Dorries says that the charity-run abortion services – including the British Pregnancy Advisory Service (BPAS) and Marie Stopes – have a financial conflict of interest in advising women seeking terminations. She says that by offering independent counselling, 60,000 of the 200,000 abortions each year could be prevented.

The charities say that another layer of counselling could cause distress by delaying access to abortions. They also say that the counselling they offer is continuous throughout the process of seeking a termination and that there is no evidence they are biased in the care they provide.

Yvette Cooper, the shadow home secretary, said the government’s decision was based on prejudice rather than evidence.

The DH confirmed that it wanted to change the rules to offer women independent counselling in addition to that currently offered by abortion services and said it was consulting on the precise method to use, with sources acknowledging that it was a direct response to lobbying from backbenchers.

An aide to the health secretary, Andrew Lansley, said: “We remain of the view that we can do this without legislation but we aren’t shying away from a parliamentary debate. We want women to have the offer of independent counselling, independent of the abortion provider.

“We believe that it would be an improvement on the current system. Equally, the timing of it has been determined by cross-party push by backbenchers on all sides of the house to ask the government to look into this issue.”

Dorries launched her campaign for the change alongside the Labour MP Frank Field. They are backed by the campaign group Right to Know, which has set up a website and Facebook page to promote the idea.

Dorries, a former nurse who says she is campaigning on the issue after witnessing botched terminations, says she does not oppose abortion. However, she has previously campaigned to reduce the abortion time limit and said that her explicit aim was to reduce the number of terminations, claiming that 60,000 could be prevented each year if women were given independent advice.

“The important thing is that the government have highlighted themselves and agreed that counselling by organisations that are paid to conduct the procedures is not independent. That’s the most important. That’s very reassuring. It validates the amendment and what we’re doing,” she told the Guardian.

“The abortion process is so fast – seven to 14 days. Women who do have doubts or niggles are on the other side before they have a chance to think it through. The majority may feel it’s fine but there are a growing number thinking it wasn’t what I wanted to do. As it gets faster and faster more women are falling off the edge. This is a women’s rights issue.”

Dorries said she did not know how the Right to Know campaign was being funded, claiming that it represented “hundreds” of people and was run by a lobbyist. She would not reveal the lobbyist’s name, or the other organisations the lobbyist represents but did say that she was receiving advice from Dr Peter Saunders, the head of the Christian Medical Fellowship.

Saunders led the Alive and Kicking campaign, a group of anti-abortion groups including the ProLife Alliance, which campaigned for an immediate cut in the abortion time limit, prohibition of abortion for “social convenience” and a cooling-off period.

Right to Know refused to reveal how it is funded, saying only that it relies mostly on individuals. A spokeswoman said: “This is a campaign that has attracted support from people of very different backgrounds and beliefs (including atheists) who simply share the common view that the support and information that women receive ahead of an abortion should be improved.”

Pro-choice supporters and charities such as the Family Planning Association, who are mounting a lobbying campaign of MPs, warn that the proposed amendment to the health bill would restrict women’s access to impartial and non-directive information . They also predict that the counselling role could be taken up by organisations ideologically opposed to abortion.

Ann Furedi, the chief executive of BPAS, said: “The thing I find most frustrating about this discussion is the assumption behind it that we want to encourage women towards the abortion option, rather than the option of continuing the pregnancy.

“Nothing could be further from the truth. I can say with hands on heart that the last thing that anyone involved in abortion wants is for a woman to be having treatment that they are not sure about. Everybody wants people to walk away feeling that the right thing has been done.”

The health and social care bill is due to be debated in the Commons when parliament returns next week, and a decision on whether to select the amendment – one of the first submitted – will be taken on 6 September.

Dorries claimed that private polling has suggested that up to 80% of MPs could back the amendment. All three parties confirmed that, as is traditional with matters of conscience, there would be a free vote on the issue.

Lib Dem sources said that they had not opposed the decision to introduce independent counselling within the DH but that the coalition agreed the legislation was unnecessary.

Cooper said: “These plans are based on prejudice rather than evidence. This could make it harder for women to get proper health advice and counselling when they need it most. Health ministers need to urgently think again. David Cameron should not put politics before the interests of women’s health and women’s lives.”

John Healey, the shadow health secretary, said the Labour health team would vote against Dorries’ amendment: “The Tory backbenchers are hijacking the health bill to make arguments that are entirely irrelevant to the huge and fundamental changes being made to the NHS. MPs will only get two days to debate the bill, and that limited time would be spent on more important matters than this amendment.”

A DH spokesperson said the department “wants women who are thinking about having an abortion to be able to have access to independent counselling. Work is under way currently to develop proposals … on which the department will consult externally”.

Permanent link to this article: http://operationfatherhood.org/other/healthpregnancy/uk-ministers-back-anti-abortion-lobby-reforms/