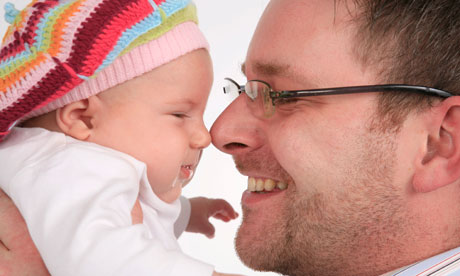 A rise in the number of stay-at-home dads has been driven by growing numbers of women earning more than their partners. Photograph: Avatra Images/Alamy

There are now 10 times as many stay-at-home dads in the UK than a decade ago, with one in seven fathers (14%) now the main childcare provider, according to research from Aviva. It says about 1.4 million men are now the primary carer in their households.

The study suggests that a quarter of families with children under 18 share childcare equally, up from 18% in 2010, while more than a quarter of dads (26%) gave up work or reduced their working hours after the birth of their children, and 44% regularly look after the children while their partner works.

Close to half of stay-at-home-dads (43%) told Aviva they felt “lucky” to have the opportunity to spend more time with their kids, but 46% of families said their decision allowed the main earner to keep working.

But men told Aviva they had had difficulties in assuming primary responsibility for children, with nearly one in five (17%) admitting it makes them feel “less of a man”, 13% claiming they found looking after the children harder than going out to work, and 13% saying they wished they earned more than their partner so they could go back to work.

Louise Colley, head of protection marketing for Aviva, said: “It is really interesting to see how the responsibilities of parents are shifting. There is no longer a ‘norm’ for who does what in a family relationship, and it’s great that many mums and dads are enjoying non-traditional roles.

“We know from our latest Family Finances report that the cost of childcare means many families feel it’s not worthwhile both parents working – so it’s no surprise to see more men taking up the reins.

“However, this also means that many families are relying on one salary, which can leave them financially vulnerable.”

Justine Roberts, co-founder of Mumsnet, said the survey failed to highlight the struggles facing many women who choose to return to work. “In our experience, women still pick up the bulk of the domestic duties in the house – even when both parents are working.

“It is great that men are getting more involved with the kids, but there’s still a big divide on other activities with women doing more cooking, reading with kids, activity planning, and homework to name a few, which is why we see so many women still struggling to balance a successful career with family life.”

Permanent link to this article: http://operationfatherhood.org/other/childcare/uk-stay-at-home-dads-on-the-up-one-in-seven-fathers-are-main-childcarers/