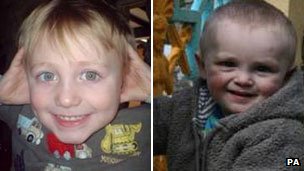 Two children were unlawfully killed by their pregnant mother who then took her own life, a coroner has recorded.

Philip Stevens, five, and two-year-old Izaak were suffocated by their mother Melanie, 37, before she hanged herself, the inquest in Caernarfon heard.

Their bodies were found at home in Trawsfynydd, Gwynedd, in December last year after relatives contacted police.

The inquest was told the mother-of-five’s other children were safe at the home of a relative.

He said that Ms Stevens had left letters, which he declined to read out at the inquest, which he described as “goodbye-type letters” which indicated she had had enough of life.

PC Adrian Wyn Owen told the inquest that concerns were raised that Ms Stevens’ car was parked outside her home, but relatives were unable to make contact.

After initially visiting the house on the afternoon of 19 December, PC Owen returned again that evening with PC Raymond Williams and they took the decision to force entry.

The downstairs of the property was tidy and decked out in Christmas decorations with presents laid out under the tree, the inquest heard.

PC Williams, who knew Ms Stevens and the boys, went upstairs where he discovered their bodies.

There were two handwritten notes nearby.

PC Williams said his first concern was the welfare of the older children.

“I was aware of the three other children and we searched the other rooms but they were not in the house,” he said.

“I decided to call a close relative of Melanie, without letting them know at that stage what had happened, to ascertain the other children were safe, and they were.”

The officers said there was no evidence that any other people had been involved in the incident.

The inquest heard that Ms Stevens was six months pregnant, although she had undergone a sterilisation procedure.

Nicholas Smith, Izaak’s father, read from a prepared statement after the hearing in which he paid tribute to both boys.

“Izaak and Pip were full of beautiful innocence and happiness and everybody that knew them just loved them. They were wonderful boys,” he said.

“They were just like any other boys, excitable, messy, funny, inquisitive. They were taking on the world like children do.

“Everybody who knew them has their own story to tell about what they were like.

“I first met Pip when he was a few weeks old, almost six years ago, he grew up calling me daddy and I treated him like one of my own children.

“Izaak was so special to me and I cherish every moment that we were together. He was my future. We were father and son and the hopes that I held for us are now gone and there is no plan B.”

Mr Smith said their mother’s actions had taken “some of the innocence and beauty out of this world and left it a different place”.

“For a long time there were qualities about Melanie that I loved – she was funny, creative, passionate and caring, and she was beautiful,” he said.

“But there was fault somewhere that led her to believe the solution to her problems was to kill Izaak and Pip and then commit suicide, taking her life and the tiny life inside her.”

Permanent link to this article: http://operationfatherhood.org/other/child-murder/wales-melanie-stevens-killed-two-sons-and-herself-inquest/