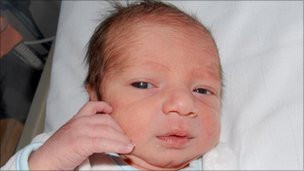 A mother abandoned her newborn boy in hospital after disappearing outside for a cigarette.

The boy, called Charlie by nurses, was left by the woman who police suspect gave a false name.

She was last seen walking towards the car park at Newham General Hospital in east London on Wednesday.

The woman, who said her name was Katalena Sctarra, had given birth minutes after arriving at the hospital.

She went into labour in East Ham on Wednesday evening and a passer-by called an ambulance.

Just before midnight Miss Sctarra went outside the hospital to have a cigarette and then disappeared.

She is described as aged about 25, eastern European, possibly Romanian, and slim with blue or green eyes, shoulder-length blonde hair and is about 5ft 4in tall.

She may have been living in Birmingham.

She was wearing a grey bomber jacket with a pink zip and a multi-striped hooded jumper when she went missing.

She spoke broken English with an accent.

Detective Sergeant Gerard Healy, from the Newham Missing Persons Unit, said: “This is a heartbreaking case and we hope that Charlie’s mother comes forward to be reunited with her baby boy.

“Whilst Charlie is receiving the best possible care, we are concerned that his mother may require medical attention and support.

Permanent link to this article: http://operationfatherhood.org/other/abandoned/england-newborn-boy-abandoned-in-newham-hospital/