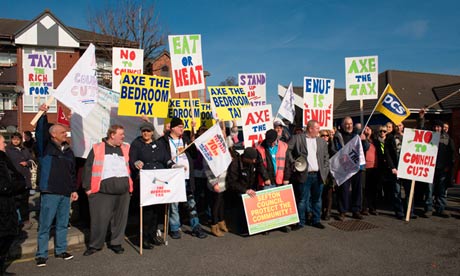 People protest against the bedroom tax in Liverpool last month. Photograph: David Colbran/Demotix/Corbis
Foster carers who look after more than one child could still be charged hundreds of pounds a year after being classed as having “extra” rooms under the new “bedroom tax” rule of housing benefit.
Ministers said this week that up to 5,000 foster carers would be exempt from the under-occupancy benefits deduction as part of a series of partial concessions. But charities said the exemption would only apply to a single additional room, and would not apply to carers in receipt of housing benefit who looked after more than one child, including older siblings.
Foster carers affected by the bedroom tax who look after more than one child could now face having to apply for financial support to a discretionary housing fund set up by the government. They will have to reapply to the fund every six weeks, even if looking after children on a long-term basis.
Robert Tapsfield, chief executive of the Fostering Network, said: “While we are delighted for the many foster carers who are now exempt from the housing benefit penalty, we are extremely concerned for those who have more than one bedroom for fostered children.
“Forcing foster carers to rely on the discretionary housing fund was always an inherently flawed idea. The Fostering Network identified many examples of bad practice and confusion, and reported these to the DWP [Department for Work and Pensions], persuading them of the need to change policy.
“By restricting this [exemption] to those who only foster one child, the government is leaving many foster carers struggling to get access to the fund.”
The Fostering Network said it did not know what proportion of UK foster carers looked after more than one child. Foster carers in England often receive approval to foster up to three children at a time.
The charity, which in its initial response to the government’s apparent concession on Tuesday said foster carers would “sleep easy”, stated that after having had clarification from the DWP, it was now disappointed and would be renewing its campaign against the tax.
The benefit deduction, to come into effect in April, will be applied to working-age claimants in social housing who are rated as having more bedrooms than they require.
Tenants affected will face a 14% cut in housing benefit for the first “excess” bedroom, and 25% where two or more bedrooms are “under-occupied”.
The government, which estimates the average household affected will lose £14 a week, says the policy will save the exchequer £500m a year.
The government said on Tuesday that foster carers would be allowed an additional room as long as they had fostered a child or become a registered carer in the past 12 months.
A spokesperson for the DWP said: “We’ve just announced that foster carers on benefits are entitled to a spare room and they are also better off because we do not take into account any income made from fostering when calculating their benefits.”

Permanent link to this article: http://operationfatherhood.org/family-law-public/foster-care/uk-foster-carers-with-more-than-one-child-will-still-face-bedroom-tax/