WALES/ENGLAND – No one should be jailed in secret, says top judge 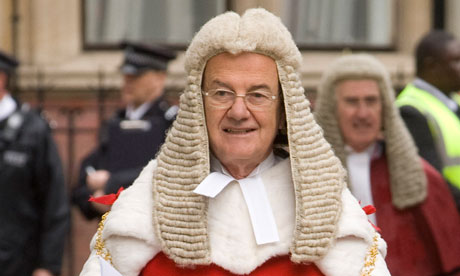 Lord Judge said: ‘There are never any circumstances in which anyone may be committed to custody without these matters being publicly stated.’ Photograph: Tim Rooke/Rex Features

No one should be jailed in secret, the lord chief justice has said in urgent guidance sent out to judges following the court of protection‘s imprisonment of a woman for contempt.

The two-page circular, released on Friday, is a swift response by the senior judiciary to concerns raised about the case of Wanda Maddocks, who lives in the Midlands, which emerged last week.

She was jailed last year for disobeying court orders relating to the care of her 80-year-old father but not identified at the time. Maddocks is believed to be the first person sent to prison by the court of protection, which looks after the interests of those deemed unfit to control their own affairs.

The new guidance has been issued by the lord chief justice, Lord Judge, and Sir James Munby, who is president of the family division of the civil courts in England and Wales and the court of protection.

It reminds judges: “It is a fundamental principle of the administration of justice in England and Wales that applications for committal for contempt should be heard and decided in public, that is, in open court.”

The circular stresses that this principle applies as much to applications for committal for contempt in the court of protection and in the family division as to committal applications in any other division of the high court.

“There are never any circumstances in which anyone may be committed to custody without these matters being publicly stated,” says the guidance, adding: “Committal applications in the court of protection or the family division should at the outset be listed and heard in public. Whenever the court decides to exercise its discretion to sit in private the judge should, before continuing the hearing in private, give a judgment in public setting out the reasons for doing so.”

In “exceptional cases”, it says, the court of protection may adjudicate on a committal hearing in private but even in that case it must announce in public the name of the person who has been jailed for a contempt, “in general terms the nature of the contempt of court in respect of which the committal order is being made and the punishment being imposed”.

Earlier this week it also emerged that the justice secretary, Chris Grayling, had written to senior judges requesting a review of the “transparency” of the court of protection.

In the belatedly released judgment on Maddocks, the judge in Birmingham gave reasons for imposing a five-month prison sentence. Judge Cardinal said Maddocks had persistently breached court orders designed to protect her father, who suffers from Alzheimer’s.

The judgment said she had taken him out of his care home, discussed details of the case with him in defiance of court orders, caused her father distress and left abusive messages for council staff and the social worker in the case.

The judge added: “In the circumstances it seems to me that there is no alternative other than to commit this lady to prison. I realise, of course, that in doing so I would be punishing [her father] to a degree because in some small way he still appreciates visits from his daughter, although she seems to ruin part or all of most of the visits and telephone calls, but the court cannot allow this situation to continue whereby she abuses [the social worker], she abuses staff at [the care home] and she defies the court order by bringing her father to court.

“She is causing him very considerable grief. In those circumstances it seems to be only right she should go to prison.”

Maddocks served six weeks of her sentence before being released. She told the Daily Mail: “[When] they told me I had been sentenced to jail for contempt of court, I couldn’t believe it.

“They told me it was almost unheard of for somebody to be jailed like that in a civil hearing without first being given the chance to explain themselves.”

She said she had wanted to take her father out of the council home to provide him with better care.

Permanent link to this article: http://operationfatherhood.org/family-law-public/court-of-protection/walesengland-no-one-should-be-jailed-in-secret-says-top-judge/