WALES/ENGLAND – How will I prove domestic abuse in new legal aid changes? 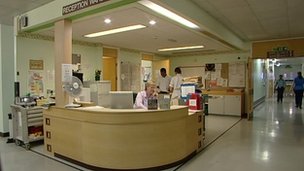 A member of staff has been suspended after a dummy was found taped to a baby’s face at Stafford Hospital.

Staffordshire Police said it happened earlier this month and the baby was four months old at the time.

The trust is at the centre of a public inquiry into serious failings of care.

In a statement, Staffordshire Police said officers were investigating a complaint about a member of staff at the hospital and liaising with the baby’s family and the NHS trust.

It said: “Officers from our Protecting Vulnerable People Department are at the very early stages of investigating a complaint concerning the treatment of a baby boy by a member of staff at Stafford Hospital earlier this month.”

Mr Ovington, director of nursing and midwifery, said: “We cannot emphasise strongly enough that this incident is exceptional and apologise again to the family.

“We want other hospitals to learn from this so that we can be sure that it does not happen to any other baby.”

A report following a £13m public inquiry into “appalling standards” of care at the hospital is to be published next month.

Permanent link to this article: http://operationfatherhood.org/family-law-public/child-abuse/england-dummy-taped-to-babys-face-at-stafford-hospital/