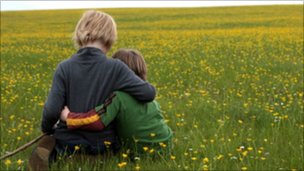 About 500,000 children and adults a year are involved in the family justice system

The time it takes for the family courts to make decisions about whether children should be taken in to care or adopted has been cut.

The average length of such cases in England and Wales fell from 55 weeks in 2011 to 49 weeks last year.

A review of the family justice system in 2011 complained of “shocking delays” which were harming children.

It called for a six-month time limit for care hearings, which ministers are bringing in.

Statistics released by the Ministry of Justice show a year-on-year drop in the time cases take, but also a steady fall throughout 2012.

Data for the last three months of the year put the average time taken per case at 45 weeks.

The number of children being taken into care has risen since the death of Peter Connelly, known as Baby P, in 2007.

The final report from the Family Justice Review said delays might deny children a permanent home, harm their development, cause them further upset or expose them to more risk.

It said the delays were also slowing down the adoption process for many children.

The government has pledged to speed up the adoption system and is pressing councils to act more quickly, but councils have said cases are often held up by the courts.

The family courts rule on cases where local authorities want to remove children from their natural families for reasons including risk of abuse or neglect.

They hear evidence from parents and relatives, plus councils and experts, before making the decisions.

The head of the review panel, former senior civil servant David Norgrove, is now the chairman of the new Family Justice Board, which was created last summer.

“I’m very pleased about what has been done,” he said.

“The judiciary has really grasped this, as has the government. Local authorities and Cafcass [which represents the interests of children involved with the family courts] were also firmly behind it.

“It is a real team effort.”

Mr Norgrove said delays in the system had been reduced in several ways.

“It has not really been about changing the nature of what people do, but about cutting the time taken to do it,” he said.

“It has been a case of presenting better evidence from local authorities, then everybody, as the case progresses, making sure that things happen quicker and on time.”

Fewer experts are being called to give evidence in cases, he added.

The law was changed in January so that experts are called when it is said to be “necessary”, rather than just “reasonable”.

The Norgrove report, published in November 2011, also said courts should focus on where a child goes, rather than spending time looking at detailed care arrangements for children.

Some judges have raised concerns about the changes, believing the existing system offers the best protection to vulnerable children.

The government is now bringing in a six-month deadline (26 weeks) for decisions on the care of children.

That change is going through Parliament and is due to become law next April.

In a speech earlier this week, Sir James Munby, President of the High Court’s Family Division, said the family justice system was “undergoing the most radical reforms in a lifetime”.

“Changes we are planning on public law will mean we have a care proceedings system in which delay is no longer acceptable and where there is a much clearer focus on the child and their needs.”

Permanent link to this article: http://operationfatherhood.org/family-law-public/adoption/walesengland-family-court-delays-on-care-decisions-cut/