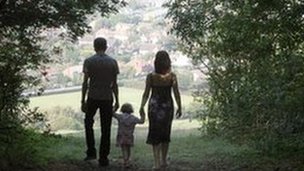 The government believes adoption waits in some cases are unacceptable.

Councils in England could lose their powers over adoption services if they take too long to find adoptive parents, ministers have announced.

The government said it was a last chance for local authorities to show they could recruit the adopters needed.

Otherwise, new laws would require them to outsource adoption services.

Ministers say they are “determined to address a situation where adopters are coming forward to adopt and are being told they are not wanted”.

“Currently there are significant weaknesses in the way local authorities bring in more adopters. The government is not prepared to see these children miss out because the adoption recruitment system is failing,” they added.

According to official figures, there were 4,600 children waiting to be adopted in England in March 2012.

Some 600 extra adopters a year were needed to cope with demand, as well as another 3,000 to deal with a backlog.

The move over adoption powers is being unveiled by Children and Families Minister Edward Timpson.

He said: “There are over 4,000 children waiting to be adopted nationally, but year on year local authorities are not recruiting enough people to give them stable and loving homes. We cannot stand by whilst children’s futures hang in the balance.

“Some local authorities are already doing a good job to recruit the adopters they need in their area – but not enough is being done to address the national shortage.”

He added: “We have set out our vision of how we expect local authorities, together with voluntary adoption agencies, to respond to the needs of all children waiting for adoption.

“Local authorities must now demonstrate that they are up to the challenge, or we won’t hesitate to intervene.”

Chairman of the Local Government Association’s children and young people board, David Simmonds, said figures show councils had twice the rate of success of independent adoption agencies and removing them from the process should only be considered as a very last resort.

“We are already looking introduce a series of measures to increase the number of adopters in the system, including looking at how councils can improve the way they work together to more widely match potential adopters with children in different parts of the country, specifically in areas where there is an acute shortage of adopters,” he said.

“Councils are getting on with their part of the job by approving more children for adoption, with 12% more children adopted in 2012 than 2011, the highest figure since 2007. Government now needs to play its part by finally reducing the heavy legal burden of care proceedings and ridiculous bureaucracy which causes huge delays that can put some people off adopting altogether.”

The Department for Education said long-term structural reforms would take time and so it would return £150m to councils to help tackle pressing needs in adoption services.

Latest figures show children are left in care for an average of 21 months before being adopted.

In some areas, they have to wait up to three years before the process is completed.

Permanent link to this article: http://operationfatherhood.org/family-law-public/adoption/england-adoption-councils-could-lose-powers-says-government/