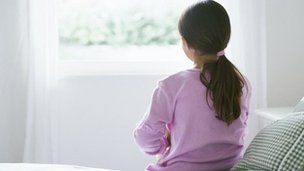 Ministers say the changes are in the interests of children foremost

A family justice system shake-up giving children legal rights to maintain relationships with both parents after separation has been criticised by the man who chaired a review of the rules.

David Norgrove voiced “regret” after it emerged that his recommendation that such a statement risked “confusion” and “false expectations” had been rejected.

Ministers are formally expected to respond to his report on Monday.

But a legal guarantee of equal access looks set to be ruled out.

In its formal response to the report, to be published on Monday, the government will pledge an extra £10m for mediation services in a bid to reduce the number of cases going to law.

Children’s Minister Tim Loughton said the state had a duty to ensure that one parent was not “pushed out” of their offspring’s life and it would act accordingly.

When disputes are settled in court – presently around one in 10 – it will promise to find ways to ensure no parent is excluded unless they pose a safety or welfare risk.

A working group will examine potential changes to the Children’s Act 1989 to incorporate the rights.

Responding to reports of the government’s plans, Mr Norgrove, a former senior civil servant, said: “The family justice system must deliver the best possible outcome for the children and families who use it, because its decisions directly affect the lives and futures of those involved and have repercussions for society as a whole.

“The family justice review panel thoroughly considered the issue of shared parenting and concluded the law should not be changed.

“If the government has decided to legislate, I regret that and it will be vital to find words that avoid the difficulties encountered in Australia.”

Mr Loughton said there was a familiar picture, involving hundreds of thousands of children “losing meaningful contact with the non-resident parent, usually the father”.

However, he rejected calls from some campaign groups such as Fathers 4 Justice for equal access, arguing it was simply impractical in most cases and led to longer delays in resolving disputes.

He said: “The concept of ‘shared parenting’ after a break-up often gets confused with the idea of equal time that a child spends with each parent.

I believe that we should enshrine the equal importance of both parents in law because children need the input of both parents, where possible, to ensure maximum emotional stability and happiness in later life.

Whilst I welcome the additional funds for mediation, in my experience this only works if both parties are aiming to achieve roughly similar things – it irons out the wrinkles. If either parent is simply unwilling to compromise, then mediation cannot work. It is especially difficult to get it to work if the resident parent simply wants to write the non-resident parent out of the child’s life.

Without parallel court proceedings to enshrine any agreement in an order of the court, there is no legally binding outcome from mediation at all.

I would welcome a system whereby there is an agency outside of the court system with the authority to ensure contact between children and non-resident parents goes ahead as ordered. As it stands, if a resident parent breaks a court order for contact, they are likely to get a slap on the wrist and not a lot else.

“A change of law in Australia designed to promote shared parenting fell into this trap and caused delays to the resolution of custody disputes, which was manifestly not in the best interests of the child.”

Ken Sanderson, of Families Need Fathers, said a move to introduce legislation enshrining a child’s rights to an ongoing relationship with both parents “would be a victory for children”.

“For too long, we have seen children of many separating couples across the country lose out on the emotional and social benefits of a loving relationship with both parents following separation and divorce, and we are delighted that the government intends to address this situation,” he said.

“This is not a question of fathers’ or mothers’ rights; it is about protecting the rights of children to have two loving parents fully involved in their lives wherever possible, to the benefit of the children, their families, and wider society,” he added.

While groups such as Fathers 4 Justice have demanded equal access, Mr Loughton said the concept of “shared parenting” was too often confused with the idea of children spending equal time with each parent.

Evidence from Australia suggested this was impractical, leading to longer delays in resolving disputes, which was “manifestly not in the best interests of the child”, he said.

“The most important thing remains the principle that the child’s welfare is the paramount consideration and this must not be diluted.

Permanent link to this article: http://operationfatherhood.org/family-law-private/uk-david-norgrove-criticises-child-access-shake-up/