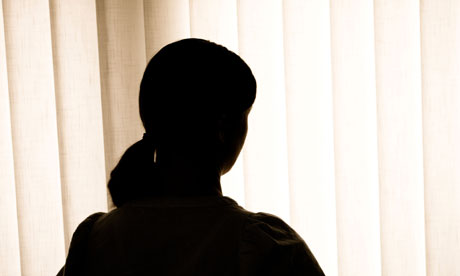 The daughter, A, began inseminating herself aged 14 at her mother’s request, before successfully conceiving and then giving birth at 16. Photograph: Robert Matton/Alamy

A mother forced her 14-year-old adopted daughter to inseminate herself with donor sperm to provide a baby for her after she was prevented from adopting any more children, it can be revealed.

The daughter, a virgin, is believed to have miscarried at 14, but went on to have a baby at 16 after regularly inseminating herself with sperm bought over the internet by her “domineering” mother because she was too scared to refuse.

Details of the shocking case have emerged in a previously secret court judgment, which can be reported today for the first time and which raises serious questions over loopholes in international adoptions and the regulation of the global traffic in gametes.

The adoptive mother, who cannot be identified for fear of identifying her daughter and grandchild, is now serving a five-year prison sentence after admitting child cruelty.

In a high court judgment deciding welfare provisions, family division judge Mr Justice Jackson described “an abiding sense of disbelief that a parent could behave in such a wicked and selfish way towards a vulnerable child”.

The mother had already adopted three children as babies from abroad, twice when she was married and once as a single parent after her divorce. She had chosen not to give birth herself because of a health condition and had undergone an elective sterilisation.

But she was distraught when an attempt to adopt a fourth baby was thwarted when she was denied approval.

The judgment, released after representations from media organisations including the Guardian, states the mother immediately turned to her adopted daughter.

The daughter “became pregnant at her mother’s request, using donor sperm bought by the mother, with the purposes of providing a fourth child for the mother to bring up as her own”, the judgment states.

“The AI [artificial insemination] programme was planned when A [the daughter] was 13, began when she was 14 and ended when she became pregnant with D [her child]” aged 16, the judge said.

The truth was only discovered at the birth. Midwives were alarmed at the “pushy and insensitive” mother, who tried to prevent her daughter breastfeeding the newborn, saying “we don’t want any of that attachment thing”. Noticing the daughter’s reluctance to hand the baby to her mother, they called in child protection workers when the mother attempted to remove the baby from the ward.

In a week-long hearing, held in private, the judge heard there were four occasions when the local authority, which cannot be named, was alerted to the mother’s inappropriate behaviour towards her children but did not find cause for concern. A serious case review into the case is due to be published next month.

The mother, described as “highly articulate”, and who “loves the children and they undoubtedly love her”, had isolated the family. The children were schooled at home, and the adoptive father of the eldest two was deliberately excluded, did not know where they lived and had not seen them for 10 years. Neighbours and social services were kept at bay.

“The mother resorted to the AI programme because she was determined to have a fourth child, and because there was no other way of achieving this,” said the judge. The daughter “allowed her body to be used by her mother because she loves her”, and though she did not want to take part, she has said in interviews she was not “brave enough” to tell her mother.

The mother subjected her to a “degrading, humiliating and, on occasions, painful” ordeal. Over two years the daughter had to inseminate herself seven times, “alone in her bedroom, using syringes of semen and douches prepared by the mother”.

Her mother had purchased ovulation-testing equipment to work out when her daughter was most likely to conceive. Because the mother wanted a girl, she forced her daughter to use painful acidic douches containing vinegar or lemon and lime juice, and eat a special diet, in the belief it could affect gender.

On the first occasion, semen was provided by a donor who came to the house. The others involved sperm purchased from Cryos International, an international sperm-bank network based in Denmark.

The daughter, who had no friends of her own age, later told investigators she was “shocked, pretty shocked” when her mother first asked her but also thought, “if I do this … maybe she will love me more”. In agreeing, she said “feelings of gratitude for my adoption influenced how I behaved”.

The court was shown a Mother’s Day list drawn up by the daughter of things she could give her mother, which included a picture of a positive pregnancy test kit.

The judge said it was “likely that A had briefly become pregnant at 14” but had miscarried. When she became pregnant at 16, health workers were told the false story that she had spent the night with a boy who abandoned her and was now abroad. The girl also told health professionals it was her wish for her mother to bring up the child. The girl had, with her mother, attended private clinics on occasion for pregnancy testing, and the mother had changed her GP.

The local authority was also alerted by an anonymous acquaintance who wrote to agencies and officials in the country from which the mother was seeking to adopt a fourth child, apparently raising concerns over her suitability. This ultimately resulted in her being denied approval. The court heard there were also questions over whether the third adoption had been legal, or if it had flouted international loopholes.

The mother had succeeded in keeping social services at arms’ length so that their intervention was “essentially superficial”, the judge said.

DNA tests showed the child was conceived using donor sperm supplied through Cryos. The judge said there were “no effective checks on a person’s ability to obtain sperm from Cryos” and that no “meaningful medical involvement is demanded”, except for a document, purporting to record the authority of a physician and which in any case the mother had forged.

The judge also noted that no checks were made on the children regarding home schooling after the mother refused to allow an education welfare officer to visit. The only contact was by email, so “the approval [for] home education was given without anyone ever setting eyes on the children”.

In a statement, the local Safeguarding Children Board said: “Nothing can change what has happened to the children in this truly terrible case. It is clear that public bodies must highlight the major public policy issues which arise from this case. The relevant local Safeguarding Children Board has undertaken a serious case review and they aim to have this published in the coming weeks.

“The lessons from this case are already being put into practice as the relevant agencies are starting to implement its draft findings.”

Permanent link to this article: http://operationfatherhood.org/family-law-private/sperm-donor/uk-girl-14-forced-to-become-pregnant-with-donor-sperm-bought-by-mother/