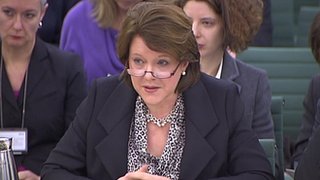 Mrs Miller said the proposals were about marriage not civil partnerships

Culture Secretary Maria Miller has clashed with a Labour MP after describing marriage as a “gold standard” that people aspire to.

She told a Commons committee marriage provided “strength of commitment” that society could “thrive on”.

But Labour’s Chris Bryant said this made him feel that his own civil partnership was not as valued and she should “rethink” her language.

The minister said she had not meant to cause offence.

MPs supported the principle of equal marriage in a landmark Commons vote last week but more than 130 Conservative MP voted against the move and the coalition only won the free vote due to the support of Labour.

Giving evidence to a Commons committee, Mrs Miller was asked by Mr Bryant why ministers were not also considering allowing heterosexual couples to embrace civil partnerships.

“This bill is all about extending marriage,” she told MPs. “That is what we believe is the gold standard. That is what people aspire to.”

But Mr Bryant, who is gay, replied: “That makes my civil partnership not feel like the gold standard. She may want to rethink the way she talks about it.”

The culture secretary said she believed extending marriage to same-sex couples was a question of fairness and ministers were not “content” with a situation in which the gay and lesbian community did not have the same rights as others.

“There should be equality here. Everybody should have the opportunity to access what is an internationally recognised status.”

Mrs Miller said marriage provided the basis for people to “commit to stay together for life” but former education minister Tim Loughton, now a backbench MP, asked why civil partnerships – which have been in place since 2005 – did not provide the same foundation.

Mr Loughton questioned when the government became “discontent with the definition of marriage” and said most Tory MPs were “blissfully unaware” of an equalities document published during the 2010 election campaign which said Conservatives would consider the step of legalising gay marriage.

An explicit commitment on the issue was not included in the party’s main 2010 manifesto.

Appearing before the same committee, which has been set up to scrutinise the plans, Education Secretary Michael Gove was asked about the implications of legalising gay marriage for the teaching of sex and religious education in schools and was asked what protections there were for teachers who had moral and religious objections to same-sex marriage.

Tory MP David Burrowes asked whether parents would be able to take their children out of RE, sex education and other classes in the curriculum where pupils were “taught about the value of same-sex marriage”.

Mr Gove said there would be an expectation that teachers would approach the subject in a “balanced” way and parents who had any concerns that their children were “subject to inappropriate teaching” would be able to raise the issue with the school.

“I cannot see what the concern is here. By definition, if you express a view reasonably and you explain what your own position is, there is no problem on any issue… the idea that this legislation changes the position of teachers perplexes me.”

He added: “It seems to me curious to imagine on this issue, as distinct from any other, that teachers would take leave collectively of their senses and obligations to young minds and seek to turn themselves either into latter-day Torquemadas or anything else.”

Church leaders said they were concerned about the implications of redefining marriage for the institution itself and for church-state relations.

“Our concern has not been simply to ensure rights and freedoms for the Church of England but a concern for the good of marriage itself,” the Rt Reverend Graham James, the Bishop of Norwich, told MPs.

“Our regret is that up to now there has been a single understanding of marriage across church and state and across the world faiths. We regret there will not be the same unanimity and there may be consequences for this that none of us have fully identified yet.”

The Archbishop of Southwark, Peter Smith – who is also vice-president of the Catholic Bishops’ Conference of England and Wales – said that while he accepted the proposals were likely to become law, “it does not mean we approve of them”.

“What we have been saying right from the start is that marriage, for millennia, has been between a man and a woman and it is about the complementarity of the two sexes,” he told MPs.

“That is the key issue. We keep getting diverted onto questions of equality and religious freedom but the nub of the argument is who, by their natural being, can be married.”

Separately, leading QC and crossbench peer Lord Pannick said it was “completely inconceivable” – as has been suggested by opponents of the proposals – that religious faiths which chose not to conduct same-sex weddings could be subject to a successful legal challenge.

The European Court of Human Rights would not tell a religious body “how to conduct a religious practice”, he said, and anyone bringing such a case would find themselves on “absolutely hopeless” ground.

Michael Gove repeatedly told the committee he didn’t think there were any grounds for teachers to be concerned about how they should talk about gay marriage, regardless of their personal views.

The new law, he said, would not have an impact on Article Nine of the European Convention on Human Rights, which provides a right to freedom of thought, conscience and religion.

In a terse exchange, the education secretary dismissed a suggestion from former colleague Tim Loughton, who he sacked from his department in September, that teachers would get into trouble for describing same sex marriage as “pretend marriage.”

“I don’t know any teachers who think ‘do you know what, in the next hour as we discuss whatever might be, I think my most important aim in the 60 minutes available to me with these young people is to explain why I think this is a ‘pretend marriage’.'”

Mr Loughton replied that “that’s not the question”, to which Mr Gove responded: “Well, that’s my answer.”

Permanent link to this article: http://operationfatherhood.org/family-law-private/marriagefamily-life/uk-minister-clashes-with-mp-over-gold-standard-marriage-claim/