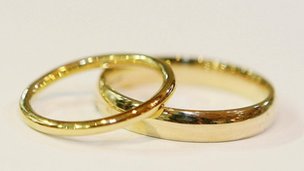 The government will not introduce a tax break for married couples in next month’s Budget, it has emerged.

There had been speculation that David Cameron would bring in the measure to appease Tory backbenchers who are opposed to gay marriage.

However legislation will be introduced before 2015 to allow couples to transfer part of their personal tax allowance to their partner.

The Commons will vote next week on the government’s plans for gay marriage.

The Marriage (Same Sex Couples) Bill would enable same-sex couples to get married in both civil and religious ceremonies, where a religious institution had formally consented, in England and Wales.

It would also allow couples who have previously entered into civil partnerships to convert their relationship into a marriage.

The tax measure is in the coalition agreement but Liberal Democrat MPs would be allowed to abstain.

It is expected that one member of a married couple or civil partnership would be able to move £750 of their tax-free personal allowance to their partner, reducing their tax bill. This would be worth about £150 a year to basic-rate taxpayers.

A senior government source said: “It won’t be in the Budget but it will be in this parliament. This Budget obviously, with all that has happened in recent weeks and months, will be very much focused on growth in the economy”.

According to the Times, the issue of gay marriage is causing Conservative members to leave the party in significant numbers.

The newspaper claimed that as many as 100 members had revoked their affiliation in some constituencies.

Tory MP David Burrowes is quoted as saying: “There’s serious unrest in the grassroots. You cannot avoid the fact that the troops are unhappy. People are drifting away.”

BBC political correspondent Vicki Young said the tax news had to be seen in the context of the highly contentious vote on gay marriage, with dozens of Tory MPs opposed to it.

The two issues are linked in their minds because they say it is about David Cameron’s priorities, putting gay marriage ahead of married tax breaks.

Some of them say it will increase anger and consternation on the backbenches, our correspondent added.

Conservative MPs will get a free vote on same-sex marriage. Labour and the Lib Dems have backed the idea.

The bill will allow religious organisations to offer same-sex marriages but they would not have to.

Equalities Minister Maria Miller has said no religious organisation “will ever be forced to conduct marriages for same-sex couples”.

Permanent link to this article: http://operationfatherhood.org/family-law-private/marriagefamily-life/uk-budget-2013-no-tax-break-for-married-couples/