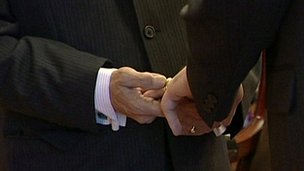 Peers have spent several hours debating whether to “wreck” the government’s plans to bring in same sex-marriage, ahead of a crucial vote on Tuesday.

The bill, covering England and Wales, was backed by the Commons with a 205 majority, despite 161 MPs opposing it.

Ex-chief constable Lord Dear, who has tabled the amendment aimed at stopping it proceeding any further, called the proposals “ill-considered”.

But the government said everyone should have the right to marry.

The Archbishop of Canterbury said he had “considerable hesitations” about the plan.

The Marriage (Same Sex Couples) Bill for England and Wales would allow couples who can currently form civil partnerships to marry.

The debate started early on Monday afternoon and is due to continue on Tuesday, with a vote expected at about 1900 BST.

If the bill passes, religious organisations would have to “opt in” to offering weddings, with the Church of England and Church in Wales being banned in law from doing so.

It is backed by Prime Minister David Cameron, his Liberal Democrat deputy Nick Clegg and Labour leader Ed Miliband – 366 MPs voted in favour in the free vote in the Commons,

The bill, which has been criticised by Conservative activists, is expected to face a tough passage through the Lords. If crossbench peer Lord Dear’s amendment, aimed at preventing the legislation getting a second reading, were passed, it would effectively kill it.

The former chief constable of West Midlands Police told peers the bill was “ill-considered” and sought to “overturn centuries of tradition”.

It was “blind to the laws of unintended consequences”, he added, calling homosexuals “a very small minority”.

Lord Dear also said: “The concept should be sent back to the drawing board. This is too serious a matter to be hurried through on a whim and in a cavalier fashion.”

But equalities minister Baroness Stowell of Beeston said: “For gay and lesbian couples this matters. It matters because it means the final acceptance of who they are.”

She added that discrimination against homosexuals was “wrong” and that “no religion or faith would be required to change its beliefs or doctrines” as a result of the bill.

Same-sex marriage was “new and different” but would “not affect the nature of existing marriage”, Lady Beeston said.

Baroness Royall, Labour’s leader in the Lords, said she understood the bill had caused “anguish” for some people of faith, but she did not understand the argument that gay marriage could “harm marriage between a man and a woman”.

But the Archbishop of Canterbury, the Most Rev Justin Welby, told the Lords the plans would “weaken” existing marriage, adding that ministers were confusing “equality” with “uniformity”.

He added: “I and many of my colleagues retain considerable hesitations about this bill.”

“The rights of a homosexual man are identical to mine. Subject to the laws on incest and bigamy, we are both free to marry a woman. Neither he nor I may marry another man. Our positions are identical.”

And Labour’s Lord Anderson of Swansea challenged Mr Cameron to hold a referendum on the issue, saying: “Surely this proposed change is far more fundamental to our society than any transfer of power to Brussels.”

He said the prime minister “and his friends can put their case”, but added that “many of us – Conservatives, Labour and crossbenchers – will be on the other side. Let the people decide.”

Some 86 peers are expected to speak in the debate with a final vote due on Tuesday evening.

The Conservative Grassroots group has called on peers to reject the bill, but Mr Cameron hopes it will become law soon and that the first ceremonies can take place by next summer.

Permanent link to this article: http://operationfatherhood.org/family-law-private/gay-marriage/walesengland-gay-marriage-bill-lords-debate-wrecking-amendment/