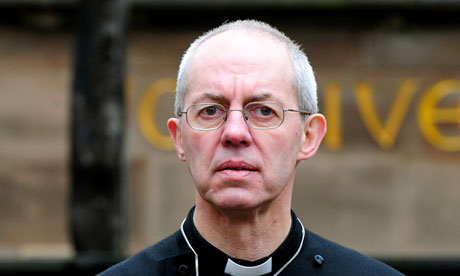 The archbishop of Canterbury, Justin Welby, said his concerns did not stem from faith but from he believed was best for society. Photograph: Rui Vieira/PA

The archbishop of Canterbury has torn into the government’s gay marriage bill, warning that it will create “different and unequal” forms of marriage that will undermine family life.

As peers embarked on a two-day debate, in which 91 are due to speak, Justin Welby claimed on Monday that the bill was in an “awkward shape” and would undermine marriage as the basis for rearing children.

But Welby criticised Lord Dear, the former chief constable of West Midlands police, who is attempting to kill off the bill by tabling an amendment that would decline to give it a second reading. The archbishop said of the Dear amendment, which is due to be put to a vote on Tuesday : “Personally, I regret the necessity of having to deal with the possibility of a division at this stage on a bill passed by a free vote in the other place [the House of Commons].”

The archbishop made clear he shared Dear’s concerns about the bill. Welby told peers the bill had created confusion, adding: “Marriage is abolished, redefined and recreated – being different and unequal for different categories. The new marriage of the bill is an awkward shape with same gender and different gender categories scrunched into it – neither fitting well.

“The concept of marriage as a normative place for procreation is lost. The idea of marriage as covenant is diminished. The family in its normal sense predating the state and as our base community of society is weakened.

“For these and many other reasons those of us in the churches and faith groups, who are extremely hesitant about the bill in many cases, hold that view because we think that traditional marriage is a cornerstone of society and rather than adding a new and valued institution alongside it for same gender relationships, which I would personally strongly support to strengthen us all, this bill weakens what exists and replaces it with a less good option that is neither equal nor effective.”

Welby said that his concerns did not stem from faith but from what he believes is the best for society. He said: “And so with much regret, but entire conviction, I cannot support the bill as it stands.”

Dear turned to Lewis Carroll to attack the bill as he quoted Alice saying she did not know what Humpty Dumpty knew about glory. Dear quoted Humpty Dumpty’s contemptuous reply: “Of course you don’t till I tell you. I meant there’s a nice knockdown argument for you.”

The peer quoted Alice objecting on the grounds that “glory doesn’t mean a nice knockdown argument”, prompting Humpty Dumpty to say: “When I use a word … it means just what I choose it to mean. Neither more nor less.”

Dear told peers that the exchange between Alice and Humpty Dumpty could apply to the gay marriage bill. “My lords, I would suggest that if we substitute the word ‘marriage’ for ‘glory’ we get somewhere very close to the essence of this debate today. As Humpty Dumpty might have said: there is a nice knockdown argument for you. Marriage means just what I choose it to mean: neither more nor less.

“If we move away from Lewis Carroll’s Alice and back Through the Looking Glass we find ourselves in a world where an ill-considered bill seeks to overturn centuries of tradition, heedless of public opinion and the views of religious leaders and blind to the laws of unintended consequences. It seeks to alter totally the concept of marriage as we have always known it. It seeks to divide a nation with an argument that hides behind the concept of equality when in reality it is about sameness.”

Dear argued that the bill could set back recent progress on gay rights by inflaming public opinion. “The bill is in a mess. It is ill thought through, lacks support in the population as a whole, and is likely to antagonise, or even inflame, public opinion. It has nothing to do with equality, which is already in place with civil partnerships, and it attempts to dignify an admittedly very small minority of partnerships with the description ‘marriage’ – a term that has been understood differently for centuries.”

Permanent link to this article: http://operationfatherhood.org/family-law-private/gay-marriage/walesengland-archbishop-of-canterbury-gay-marriage-bill-will-undermine-family-life/