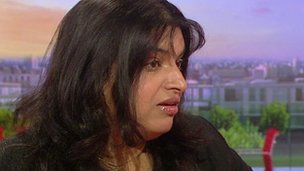 Sameem Ali was forced into a marriage aged 13

Teachers, doctors and airport staff need to be alert to the problem of forced marriages over the school holidays, the government has warned.

Ministers said there were concerns about teenagers being taken abroad thinking they were going on holiday but being forced into marriage instead.

Figures suggest cases are particularly common during the summer break.

Recent estimates suggest more than 5,000 people from the UK are forced into marriage every year.

More than a third of those affected are aged under 16.

The government is calling for increased awareness, and is promoting an advice line and information cards aimed at potential victims to explain how they can get help.

Foreign Office minister Mark Simmonds said: “The school summer holidays are the time when young people are at the highest risk of being taken overseas for a forced marriage.

“Our ‘Marriage: It’s Your Choice’ cards highlight that people who are at risk of forced marriage know they can turn to our Forced Marriage Unit for support, whether they are at home or are already abroad.”

Ministers said it was wrong that teenagers who should be thinking about their exam results found themselves lured into a life of fear and subservience instead.

Aneeta Prem, founder of children’s organisation Freedom Charity, said: “It’s vital that young people travelling abroad for a family wedding this summer realise it could be their own wedding they’ll be going to and know who they should contact for help should they find themselves in danger.”

‘No questions were asked’

Manchester City councillor and forced marriage campaigner Sameem Ali said little had changed in the 30 years since she was forced into a marriage in Pakistan at the age of 13.

She said: “I did not know I was going to get forced into a marriage until a week before the marriage actually occurred. I had never seen the guy before. I was in the middle of nowhere and I did not know where I was.”

She was told the only way to return to the UK was to fall pregnant. “At the time I did not know what that was – I was that naive. All I could do was pray. I did get pregnant about five months later and my mother took me back to the UK,” she said.

Once back in the UK, despite being a pregnant 14-year-old, she said “no questions were asked”.

“I had contact with doctors and hospitals but no one asked any questions,” she said.

“Because if they don’t talk about it then the young people aren’t going to feel comfortable in talking about it, and it’s going to be a taboo subject for the next 30 years – and I think we need to get over that.”

She added that she did not believe criminalising forced marriage would make a difference within her community.

“It’s going to send it underground. No young child wants to put mummy and daddy in jail and that’s the bottom line.”

“But I can’t help thinking that, given it’s been weeks since pupils and teachers started their holidays, it might have been more useful if Jeremy Browne and his Home Office colleagues had thought to do this before schools broke up for the summer,” he added.

The government is also publishing plans to follow the example of Scotland by criminalising breaches of forced marriage protection orders in England and Wales.

This could mean parents found guilty of forcing their children into marriage may face a prison sentence.

Crime prevention minister Jeremy Browne said: “This is a serious abuse of human rights and that is why we are legislating to make it illegal.”

Ahman Kassim from Newport, Wales, had an arranged marriage on holiday in Yemen when she was 11.

After hearing Sameem Ali’s story on BBC Breakfast, Ahman, who is now in her 40s, said: “It happened to me, only 100 times worse”.

Ahman’s marriage was set up by her Irish mother and her father who was from Yemen. Though she grew to love her husband, she disagrees with the premise of the marriage and the effect it has had on her own children.

She said: “I was still sucking lollipops, I didn’t know what was going on.”

“We got married in Yemen, my husband was from Yemen. He waited until I was 14 before he slept with me and I was 17 when I gave birth. We had seven children together,” she added.

The tradition of arranged marriages has led to a split in her family. One of her daughters had an arranged marriage with a man from Yemen, but due to visa issues, the family has been split up. One of Ahman’s grandchildren is in Yemen, while two of them live with their grandmother in the UK.

Ahman’s husband died last Christmas. She said: “I am struggling financially, and haven’t had a chance to grieve.”

Permanent link to this article: http://operationfatherhood.org/family-law-private/forced-marriages/uk-forced-marriages-school-holidays-prompt-warning/