WALES/ENGLAND – Master of the Rolls’ Practice Guidance of March 2013: Terminology for Litigants in Person 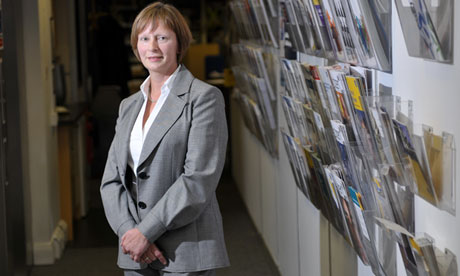 Gillian Guy, the chief executive of Citizens Advice, says domestic violence ‘haunts the lives of too many women and children. Photograph: Christian Sinibaldi for the Guardian

When the emergency services arrived at Rebecca Beattie’s home, a trail of blood led to where she lay, battered, on the kitchen floor. A day after he had promised to kill her if she left him, her partner returned home to find her with friends – attacking them and then repeatedly punching and kicking the mother of his son as she lay at his feet.

“I remember having this overwhelming feeling that this was the end of my life, this was it, but then I thought of my son and decided it couldn’t be the end – I had to see him again,” she said. “Later they told me that in the ambulance I was wailing, ‘This is not my life’.”

The war against domestic violence was meant to have been won, with a 40% decline in incidents since 1995, according to the British Crime Survey. But, in worrying new figures, the charity Citizens Advice has reported a substantial increase in the number of people telling advisers they are victims.

The figures reveal that 13,500 people – 80% of them women – reported domestic violence to Citizens Advice last year. There were 3,300 reported incidents between October and December 2012, an 11% increase on the same period the previous year. Although the figures should be treated with a degree of caution – a spike in reports of domestic violence, often considered to be a hidden crime, can arise as women feel more able to report it – Citizens Advice is sufficiently concerned to open specialist services for victims in 10 of its UK offices.

“These figures for domestic violence cases show it is disturbingly high and afflicts all levels of society – it haunts the lives of too many women and children,” said Gillian Guy, Citizens Advice chief executive.

Calling on the prime minister to honour a promise made on International Women’s Day to tackle the problem, she added: “As the scale of government cuts start to bite, we are concerned that our trend highlights how levels of domestic violence could get even worse. We need to see the government doing everything it can to deal with the problems of violence against women in our society and ensure they get the support they need.”

According to Home Office figures, 1.2 million women experienced domestic abuse last year in the UK, including half a million victims of sexual assault.

There is a hidden epidemic of abuse undermining decades of progress in the women’s liberation movement, according to Holly Dustin of the End Violence Against Women coalition.

“These current scandals show that abuse of women and girls is still a massive problem for our society, that we are only just starting to grapple with. We need more than policy and procedures, we need nothing less than a revolution in the way we think about this, across every section of society,” she said.

New research from Women’s Aid and Refuge – the largest provider of accommodation for domestic violence victims – reveals that, despite high-profile campaigns, many women, particularly teenagers, do not know where to turn for help if they are being abused.

The organisations, backed by Avon which financed a survey of more than 2,000 UK women, found a third did not know where to seek support, while among 16- to 18-year-olds the figure rose to 50%. In the same age group, 62% of respondents were not sure if excessive jealousy was a sign of domestic violence, while 15% could not say if punching was domestic violence. A 2005 study from the NSPCC found 43% of teenage girls questioned believed that it was acceptable for a boyfriend to be aggressive towards his partner.

Claire, who is now 22, was abused by her boyfriend from the age of 15 but did not recognise that she was a victim of domestic abuse. At first he would undermine her confidence and call her names, hack into her emails and check her texts. Then came the physical abuse, relentless kicks and punches, always landing on areas of her body where bruising wouldn’t show.

“I didn’t think domestic violence happened to teenagers – I just thought it was something that happened to married couples,” she said. “I didn’t really know what a healthy relationship was, I suppose. I had nothing to compare it to.”

She firmly believes children should be taught about domestic violence. “I look back at all the pointless things I learned in school, and just think they could have taught me this one key thing. I think it would help so many people not get into bad relationships, but also stop people causing them.”

Joanne Wood, who was abused by her partner from the age of 16, was similarly unaware of what was happening to her, not recognising that being forced to have sex was wrong. “I’d cry every time and he would do certain positions so he didn’t have to see me cry,” she said. “He was my boyfriend so I didn’t think it could be rape.”

With only 15% of 16- to 18-year-olds getting knowledge of domestic violence from school, a total rethink of sex and relationship education was needed, said Sandra Horley, chief executive of Refuge. “Refuge and Women’s Aid are struggling to make a difference but we can’t do it on our own, we need proper government funding and commitment to get sex and healthy relationships education into every school in the UK,” she said.

She added that 50% of Refuge services had been hit by funding cuts since the introduction of austerity measures. “Finding a bed for an abused women is like gold dust,” she said. “These are worrying times for the domestic violence sector, services are being eroded so it is time to call for a sea change and argue that prevention is better than cure.” The Speaking Out in Her Name campaign from Refuge and Women’s Aid is calling for statutory relationships education, a move that has been blocked by the Department for Education, according to Stella Creasy, Labour MP for Walthamstow. “The government wants to leave it up to schools whether they teach children about relationships, but I can’t understand why in schools children will be guaranteed education about finance, but not about consent,” she said. “I am worried the government does not understand the true costs of that choice.”

Jeremy Browne, Home Office minister for crime prevention, said: “Domestic and sexual violence are dreadful crimes and we are serious about tackling the abuse suffered by women and girls across the country. Through our This is Abuse campaign, we have taken great strides in challenging unacceptable attitudes in teenage relationships and in helping teenagers to recognise abuse when they see it.”

He added that the government had ringfenced nearly £40m until 2015 to help fund domestic and sexual violence support services.

Rebecca, who was abused from the age of 17 until last year, is now 24. After the final attack left her needing reconstructive surgery on her face, her boyfriend pleaded guilty to assault and assault occasioning actual bodily harm and was jailed for 16 months. She specifically asked for her real name to be used in this article. “I want to show that I am not going to let him scare me any more; he’s not in control of my life,” she said. “I do feel safe now, I am protected – and I want other women to know you can leave an abusive relationship, there is light at the end of the tunnel.”