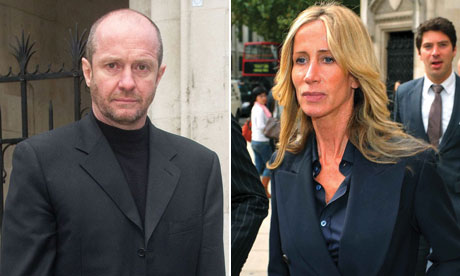 Jailed British property developer Scot Young, an associate of Russian oligarch Boris Berezovsky, constructed a secret network of offshore companies to hold his assets during a multimillion-pound divorce battle, according to the International Consortium of Investigative Journalists (ICIJ’s) research.

His story graphically demonstrates the way hideaways such as the British Virgin Islands (BVI) can be used by a man bent on cheating the law.

Young, 51, described as a fixer for the super-rich, rose suddenly from working-class origins in Dundee to occupy a £14m Oxfordshire mansion and to throw his money about in spectacular fashion. He once bought his then wife, Michelle, a Range-Rover filled to the roof with couture dresses. For her 40th birthday, he gave her a £1m necklace.

He is held in Pentonville prison for contempt of court, following bitter seven-year divorce proceedings in which he failed to explain where his fortune had gone. He could be eligible for parole in two weeks. He has not responded to requests for comment.

Michelle Young is suing for a share of the £400m fortune that Young reportedly owned in 2005, but which he claims disappeared and became debts of £28m within three months. He owes nearly £1m in maintenance and £1.28m in unpaid tax.

Despite declaring bankruptcy in 2010, Young continued to live lavishly. He told the high court that top businessmen were supporting him with gifts and loans.

Mrs Young alleges that associates such as the exiled Berezovsky, who was found hanged at his Ascot mansion last month, helped her ex-husband conceal his assets.

She said: “I find it disgraceful the amount of money that has been allowed to be hidden offshore, and that it is legal to put assets out of reach in cases like mine.”

Young was finally jailed in January 2013 for failing to verify his alleged financial losses. Mr Justice Moor told him he had committed a “flagrant and deliberate contempt” over a very long period of time . Back in 2005, as his marriage deteriorated, Young had joined forces with Russian businessman Ruslan Fomichev, formerly Berezovsky’s business partner, to invest in a deal to redevelop a $100m (£65m) former paint-factory site in Moscow into shops and offices.

Fomichev sold him a half share in an offshore Cyprus company, Parasol Participations Ltd, which controlled the planned property speculation. Their secret deal involved 12 obscure companies and trusts in Cyprus, Russia, the BVI and Lichtenstein.

Young subsequently claimed that “Project Moscow” fell apart and that he got no shares.

Mrs Young testified in court that in March 2006 she suddenly received a phone call from Stephen Jones, a London lawyer and owner of offshore specialists Jirehouse Capital. Jones told her that her husband had lost all his money, had attempted suicide and was seeking help at the Priory clinic. Mrs Young could, however, find no record of his admittance. Jones does not dispute making the call, but says that the contents are “subject to legal professional privilege held by our clients”.

On 28 March 2006, according to documents the Guardian has seen, Young signed a power of attorney giving the lawyer control of “interests held by me in Parasol Participations”. The authority indicates that Young’s interests are to be transferred to Solar Breeze Ltd and five other BVI companies.

A week later, according to documents seen by ICIJ, the lawyer also took control of these BVI companies, at a meeting held in Monaco. The next morning, the companies and shares were shifted even further offshore, to the tiny Caribbean island of Nevis. Jones then established a new Nevis-based trust, the “SY Refinance Foundation”, to “restructure” Young’s financial affairs.

Young’s estranged wife finally obtained a “global freezing order” from the high court in June 2007, forbidding Young from moving or selling the assets under dispute.

In May 2009, Young was summoned by a judge and ordered to explain how he was managing to live. Mr Justice Charles warned him of imprisonment if he did not do his “utmost” to give true answers to questions about his finances.

Two days later, the documents record that agents appointed by Young sought to merge the six BVI companies he had set up, containing half shares in the Moscow property .

The instruction to consolidate Young’s share of “Project Moscow” was carried out on 17 August, 2009 . This created a single new company with a different name, Solar Breeze (Consolidated) Limited. The sole share in the new company was issued to Stephen Jones’s company, Jirehouse Fiduciaries Nominees.

Jones denies fronting for the jailed tycoon. He says: “We only ever acted on behalf of various creditors (and upon the express instructions of those creditors) of Mr and Mrs Young and have never acted for Mr or Mrs Young or represented any of their respective interests.”

More from the Guardian

Permanent link to this article: http://operationfatherhood.org/family-law-private/divorce-2/uk-jailed-property-man-hid-his-assets-in-offshore-network-during-divorce/