UK – Most babies born out of marriage by 2016, trend suggests 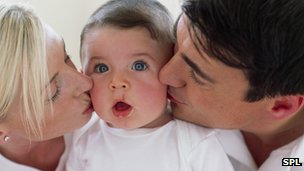 The majority of babies born in three years’ time will have parents who are not married, official figures suggest.

Figures from the Office for National Statistics go back to 1938 when just 4% of babies had unmarried parents.

One former children’s minister called on the government to tackle family breakdown by supporting marriage.

Tim Loughton told the Daily Telegraph without marriage, people “drift in and out of relationships very easily”.

“The government needs to send a very clear message that it supports marriage. That’s why married tax breaks are so important.”

David Cameron has been under pressure from some in the Conservative Party to reward marriage in the tax system.

Plans being considered by the prime minister, which could be introduced in the autumn, could make four million married couples and civil partners £150 a year better off.

The proportion of couples that are married has now fallen below 50% according to the 2011 census – the first time since 1801 (when figures were first collected) that they have been in a minority.

Permanent link to this article: http://operationfatherhood.org/family-law-private/co-habiting/uk-most-babies-born-out-of-marriage-by-2016-trend-suggests/