A father who has refused to arrange the return of his daughter to his ex-wife has been jailed again.

Egyptian Tamer Salama, 35, took his daughter Elsa from her English mother during a visit to Egypt in 2011.

His ex-wife Naomi Button, from Bramley, Leeds, has not seen the six-year-old since.

Salama, of Southampton, has already served 21 months. A High Court judge said he was “shifty” and jailed him for a further six months for contempt. 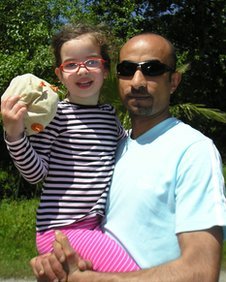 Salama, a former teacher, was initially jailed in January 2012 for breaching court orders to arrange the girl’s return to England or to reveal where she was.

His sentence has been extended on two further occasions.

He said: “I am left in no doubt at all that the father knows a great deal more of the current whereabouts and circumstances of his child than he is willing to reveal.

“I am also in no doubt that, if he chose to do so, he could send instructions to Egypt requiring whoever it is who is caring for the child, to now cause her return to England.

“He has not made the slightest attempt to do so.”

Salama has said he can not comply with the court order as he has very limited contact with his family in Egypt and they had closed ranks against him.

Ms Button and Salama were married in Egypt in 2006 and moved to England in 2007, following Elsa’s birth, and lived in Leeds.

Permanent link to this article: http://operationfatherhood.org/family-law-private/child-abduction/england-tamer-salama-jailed-again-over-missing-daughter-elsa/