The government has launched an online service allowing people to check how their income tax and national insurance are spent. 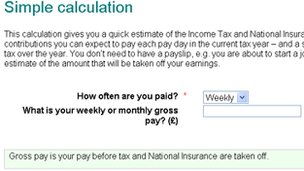 Ministers say it is part of their drive to improve the transparency of government finances.

Labour said the system did not include VAT or recent changes to tax credits and child benefits.

The service will be available via apps downloaded to smartphones and on the HM Revenue & Customs (HMRC) website.

Last year the Treasury announced that from 2014-15 every taxpayer would be sent a printed statement showing exactly how much tax and national insurance they had paid and how it had been spent.

The spending will be broken down by categories such as welfare, health, education, defence and the repayment of government debt.

“We think it is right that people know how much tax they pay and what the government spends it on,” said David Gauke, Exchequer Secretary to the Treasury.

“At the moment, over half of taxpayers do not know how much income tax and national insurance they pay in a year.

“Our new tax calculator will allow them to find out, which is a big step towards a more transparent, twenty-first century system,” he added.

* May require registration or subscription

Permanent link to this article: http://operationfatherhood.org/dwp-department-for-work-and-pensions/uk-new-tax-and-spending-calculator-launched-by-government/