WALES/ENGLAND – Appeals soar after secret courts are opened to public 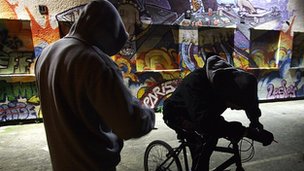 Ministers are to announce £200m extra support to help members of “troubled families” in England find work and deal with debt and drugs problems.

The government has appointed eight specialist welfare-to-work firms to help individuals overcome barriers to getting a job and staying in work.

These include skills like timekeeping, writing a CV and job interviews.

Labour and charities say the government needs to do more to tackle deep-seated educational and economic inequalities.

The government has set itself a goal of turning around the lives of 120,000 “problem families” which it says have multiple social and financial problems and which are costing the state billions of pounds through the NHS and the criminal justice system.

Last month, David Cameron pledged £450m for a network of “troubleshooters” to identify those families most in need.

‘Real commitment’Employment minister Chris Grayling will outline details of how the government hopes to encourage individuals which have not worked for many years to get back into the workplace. Specialist providers from the voluntary and private sector will be paid by results if they meet certain targets, culminating in helping people finding a job.

They will also provide specialist advice on issues like family finances, managing relationships with schools, as well as housing and health problems.

The initiative, which covers families in England with at least one person on out-of-work benefits, is being backed by £200m in funding from the European Social Fund, money the UK receives from the European Union each year.

Local authorities will decide which eligible families are referred to the support programme.

Mr Grayling said it was part of a “comprehensive” programme of support available to families – both from central and local government – whose lives have been blighted by a range of problems, including long-term unemployment, addiction, anti-social behaviour and truancy.

“The organisation taking part in this programme are staking their own money on their ability to turn the lives of these people around,” Mr Grayling said.

“There is a real commitment out there to deliver social change and to help people do much better with their lives.”

The initiative is modelled on the government’s Work Programme, a similar payments-by-results scheme which ministers say is the largest of its kind since the 1930s.

But critics say the programme has failed to deliver at a time when unemployment has risen steadily to above 2.6 million – with youth unemployment topping the one million mark – and amid predictions jobless totals will continue to rise this year.

Labour and charities have said suitable job opportunities do not exist in many of the most deprived communities.

Permanent link to this article: http://operationfatherhood.org/dwp-department-for-work-and-pensions/social-exclusion-welfare/uk-work-plan-for-troubled-families-across-england/