Government plans US-style ‘shock therapy’ to reverse spread of gang culture, which is sweeping up children as young as 10 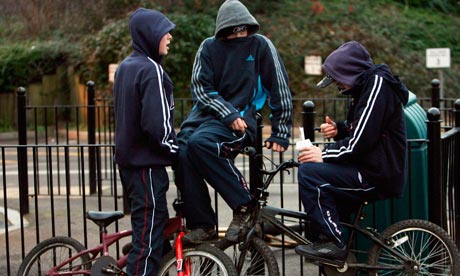 Research shows children as young as 10 are getting swept up in gangs. Photograph: Matt Cardy/Getty

A collapse in traditional fatherhood is driving children as young as 10 into gang culture, Iain Duncan Smith has claimed.

“We have a growing gangs problem. There are between 100 and 200 gangs in London alone,” Duncan Smith said.

“They are getting younger and younger. It is down to about 10 years old in some cases.

“Social breakdown means there are fathers completely missing. Constructive fatherhood has gone in many of these communities.

“Often for these boys, a gang does provide a kind of structure, it gives a sense of belonging, it gives a perverse sense of purpose. And criminal activity sometimes gives them an income too.”

In an interview with the Daily Mail, Duncan Smith said the government planned to use US-style “shock therapy” to try to reverse the trend.

A scheme to be unveiled by the Home Office and the Department for Work and Pensions this month will include “call-ins” for gang members who have not yet committed any crime.

They would be taken into a courtroom where a judge would warn them about potential penalties, and families of victims of gang-related violence describe their suffering.

“In an area dominated by gangs it’s almost impossible to improve people’s quality of life,” he told the newspaper.

“Mothers are struggling with poor education, very few skills, have had children early, often in their teens. If they are in relationships, they’re often violent, abusive ones.

“That’s the picture we see in these areas – a value set that has completely collapsed.”

Permanent link to this article: http://operationfatherhood.org/dwp-department-for-work-and-pensions/social-exclusion-welfare/uk-growing-gang-problem-is-linked-to-missing-fathers-says-duncan-smith/