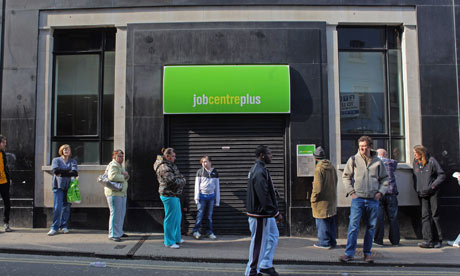 People queue outside a jobcentreplus in Bristol. There are now more than a million young people without jobs in the UK. Photograph: Matt Cardy/Getty

In a routine appointment with my personal Job Centre Plus adviser last October, I was informed of an open day for people interested in potential retail jobs. Having been unemployed for some time, I was more than happy to attend, and was told by my adviser that, if chosen, I would undergo a week’s “training” followed by a guaranteed job interview. It quickly became clear at the open day, however, that the period of “training” would potentially last for up to six weeks. I explained to my adviser my reservations about taking part: I was already in the middle of a work experience placement that I had organised for myself (and which was more relevant to the museum career I hope to pursue), and I already had retail experience.

I thought the “training” was optional, and it came as a shock to be told I was required to attend or risk cancellation or reduction of my £53 per week jobseekers’ allowance – despite the fact I have always actively sought paid work. So I began the “placement” with Poundland – it was not training, but two weeks’ unpaid work stacking shelves and cleaning floors. I came out with nothing; Poundland gained considerably.

For me, this unpaid labour scheme lasted only two weeks, but some people, as part of the government’s work programme, will have to do such unpaid work for up to six months – longer than the community service orders handed out to many criminals.

The nature of such work is not the problem. I would be happy to do it if I had a say in it and, crucially, was paid. While hoping for a career in museums, I have also been applying for any job I am able to do. Like more than a million young people today, I find living on £53 a week extremely difficult, and would be delighted to find any paid work.

Many people seem to think all job seekers are lazy scroungers, sponging off the government. The reality of trying to carve out a career in a tough job market is much more difficult than many appreciate, and not a position anyone would choose to put themselves in.

Last week, I launched judicial review proceedings in the high court – a challenge to regulations that require up to 50,000 jobseekers to carry out unpaid work at major corporations. A case such as this cannot result in significant damages; from day one, my challenge has been about the principle, not the money. It is about social justice.

I expected criticism, but some of the comments about me have been hurtful as well as inaccurate. Jan Moir’s attack in the Daily Mail, for example, overlooked the fact that I was not paid for the work I carried out and implied that I believed such work, as well as Poundland itself, to be beneath me. This is not the case – I would grab a paid job in Poundland with both hands. Similarly, Vanessa Feltz attempted to humiliate me on the radio. Such coverage has made taking a stand more difficult than I had imagined.

I am lucky to live in a country that offers financial support to jobseekers. I am also lucky to live in one where citizens to have the right to challenge government decisions. Making a million “neets” (not in employment, education or training) work for free for high-street chains leaves them feeling useless and demeaned, denies paid workers the chance to do overtime, and potentially takes jobs from those who need them. It does nothing to build on young unemployed peoples’ skills, or to tackle the causes of long-term unemployment. I hope many more people stand up to what is a badly thought-out system created without the involvement of parliament.

The coalition’s commitment to getting people into work is admirable, but this is not the right way to do it. Similar schemes have not worked in other countries, and there is evidence that coercing people into unpaid work masks rather than solves the unemployment crisis. The Department for Work and Pensions hired experts find whether “work for your benefit” schemes delivered benefits. After studying similar programmes in Canada, the US and Australia, they found no evidence such schemes increased an the chances of gaining employment. Whether or not my case is successful, I hope it will make the government think again, and work with young people rather than against them.

Permanent link to this article: http://operationfatherhood.org/dwp-department-for-work-and-pensions/jsa-job-seekers-allowance/uk-why-the-government-was-wrong-to-make-me-work-in-poundland-for-free/