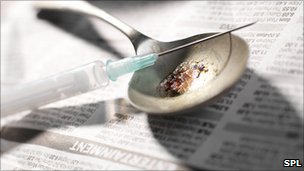 The state should intervene further to help drug and alcohol addicts recover and make them employable in future, a senior cabinet minister has said.

In a speech to Alcoholics Anonymous, Iain Duncan Smith argued that addicts who are unable to work are being let down by the welfare system.

The BBC understands removing benefits from people refusing treatment will be an option but a “hypothetical” one.

One drug charity said such a move would set a “dangerous precedent”.

In 2010, the Home Office considered plans to remove benefits from addicts who refused treatment as part of the government’s drug strategy but these were not pursued.

According to the Department for Work and Pensions, 40,000 people claim incapacity benefits – citing alcoholism as their primary condition. Of these, about a third have been claiming for more than a decade.

In a speech in Parliament, Mr Duncan Smith said “the outdated benefits system fails to get people off drugs and put their lives on track”.

“We have started changing how addicts are supported but we must go further to actively take on the devastation that drugs and alcohol can cause.

“We want to do more to encourage and support claimants into rehabilitation for addiction and starting them on the road to recovery and eventually work.”

Mr Duncan Smith said the introduction of a single, consolidated benefit known as Universal Credit from next year – more details of which will be published on Thursday – will simplify the benefits system and provide more financial incentives for employment, helping all claimants.

“Getting people into work and encouraging independence is our ultimate goal,” he added.

“Universal Credit will put people on a journey towards sustainable recovery so they are better placed to look for work in future.”

The BBC’s political correspondent Chris Mason said Mr Duncan Smith, in his speech, hinted that a lack of willingness to seek help for addictions could lead to a cut in benefits.

But a source close to the minister emphasised that the universal credit would make it easier to “track people through the system” and ensure they get the help they need.

“Hypothetically people could lose benefits,” the source told the BBC. “You do have to have sanctions. But very few people refuse treatment.”

Charities said many addicts were not receiving the support they needed at job centres and through the government’s flagship welfare-to-work programme.

One of these, DrugScope, said it would be asking ministers to “clarify” their position on sanctions for refusing treatment.

“We are surprised and concerned at reports that ministers believe that stopping benefits is an appropriate or effective way of engaging people with drug or alcohol treatment and supporting their recovery,” said its chief executive Martin Barnes

“If accurate, this would be a reversal of the government’s publicly stated position.”

It said ministers had dropped plans, proposed by the previous Labour government, to require all those attending job centres to answer questions about possible drug and alcohol use.

“There is no evidence that using the stick of benefit sanctions will help people to positively engage with treatment and support their recovery,” Mr Barnes added.

“Indeed, the risk is that people will disengage from support services, potentially worsening their dependency and the impacts on their families and communities. Linking benefit to a requirement to undergo treatment would set a dangerous precedent for people with physical or mental health problems.”

All those claiming employment and support allowance – which has replaced incapacity benefit – are currently being re-assessed under plans aimed at getting more people into work and reducing the welfare bill.

Critics have complained that the medical tests being used are flawed and too many people are being deemed fit to work when they are not.

Permanent link to this article: http://operationfatherhood.org/dwp-department-for-work-and-pensions/dwp-universal-credit/uk-state-must-go-further-to-help-addicts-iain-duncan-smith/